On the road in Middle Earth 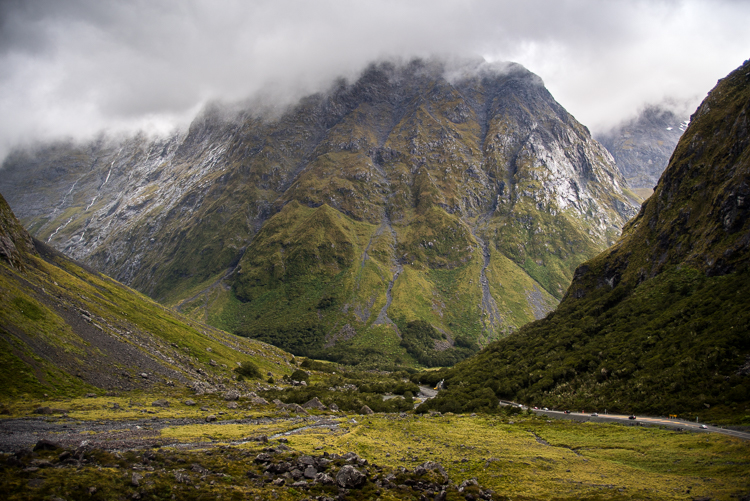 Early one February morning, I woke up in the back of a twenty-year-old minivan to the sound of torrential rain pounding the roof. I muttered a few curses, pulled on my most waterproof clothing, and stumbled through the downpour to a rustic pit toilet on the edge of the surrounding forest.

It was an inauspicious start to what would become the most beautiful day of my life.

When Ben and I got married, we took an unconventional approach to our honeymoon. Three months after the wedding, we flew to Auckland, New Zealand on one-way tickets, bought a 1995 Toyota minivan from a couple of French backpackers, and hit the road. Our van, whimsically named Moonbeam, was a bit of a clunker. She had been driven around New Zealand maybe a dozen times, and was about as reliable as you would expect—not very reliable at all. She had a head gasket leak, and the engine was prone to overheating even on small hills. But she was all ours, and with a bed and kitchen already built in, she had everything we needed to live on the road. 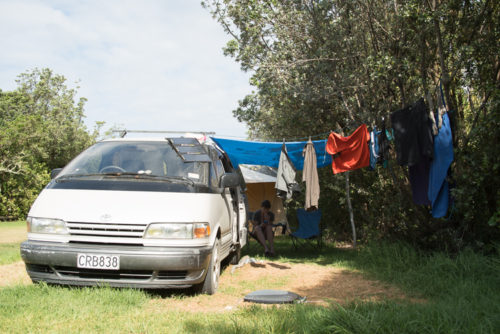 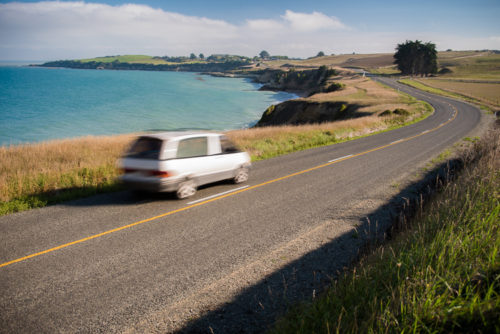 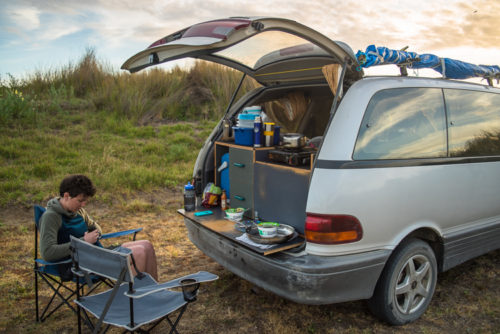 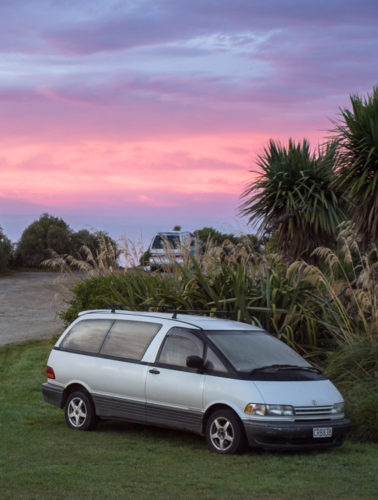 By the time we circumnavigated the North Island and reached Queenstown on the South Island, we feared Moonbeam was on her last legs. We had to stop at the top of every hill to let the engine cool down and refill water or coolant. A mechanic gave us some sealant for the head gasket leak, and told us there was no way of knowing how long it would hold. With her future uncertain, we decided to make the rest of Moonbeam’s life count—we were going to drive the winding, dead-end mountain road to Milford Sound. The most dramatic fjord out of fourteen in Fiordland National Park, Milford Sound was hailed by Rudyard Kipling as the eighth wonder of the world, and it seemed like an appropriate last hurrah for our poor van.

The Road to Milford Sound 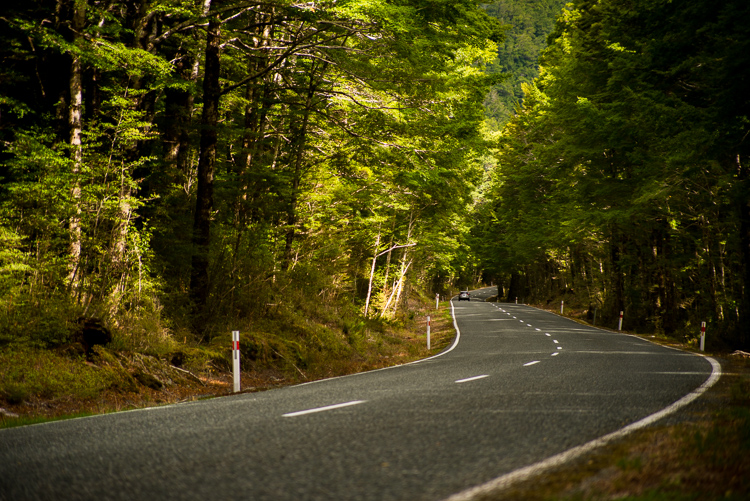 The drive from Queenstown toward Fiordland was stunning. The road, flat along the shore of Lake Te Anau, eventually began to roll up and down on the growing hills before entering a valley surrounded by high peaks. We got as far as the Homer Tunnel, a nearly mile-long passage that separates Milford Sound from the rest of the world, before deciding to stop for the night at a roadside campground.

When we woke the next morning to that awful weather, turning around was not in the cards. We had come this far, and who knew when we would be back in this remote corner of the world? Making the best of the bad weather was our only option, so we packed up and headed for the tunnel. 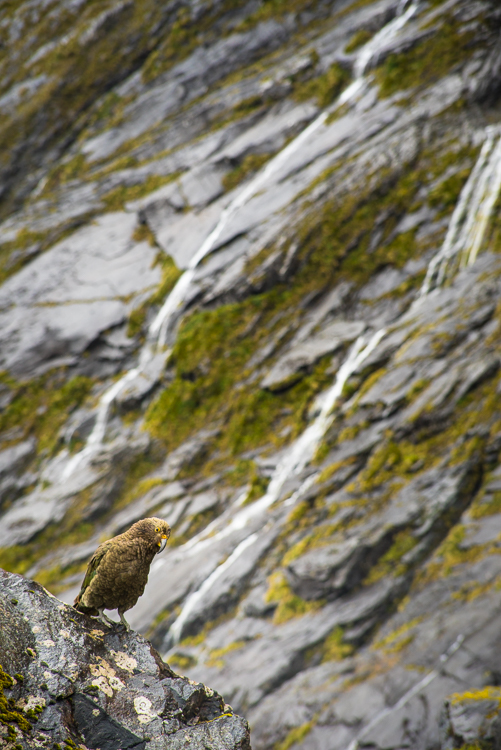 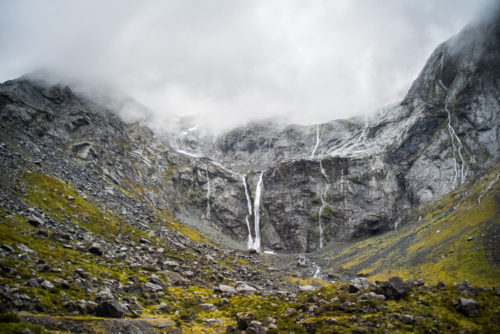 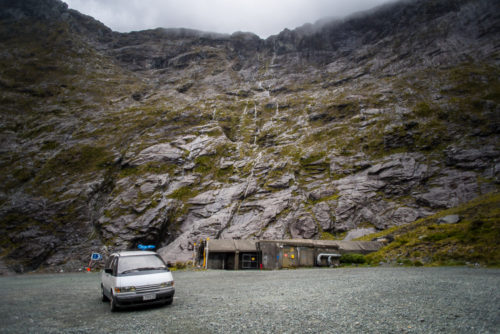 The entrance to the Homer Tunnel is an attraction in itself. It sits at the top of a gorgeous glacial valley, populated by cheeky green kea, the world’s only alpine parrot. Kea are curious, social, and notorious for landing on parked cars and picking at any rubber they can find (they’ll destroy windshield wipers given half a chance). We spent at least an hour on the trails above the tunnel, watching kea swoop through the misty valley and land with a flash of their red wing feathers. But we were on a mission, and we eventually joined the line of cars creeping into the tunnel. 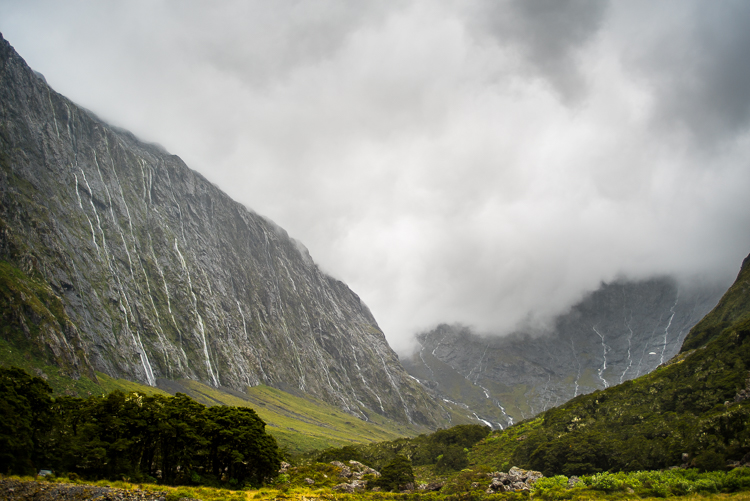 We emerged on the other side to what looked like a scene from Lord of the Rings. Verdant cliffs receded into the mist ahead of us, and after the previous night’s record rainfall, literally hundreds of waterfalls were cascading down every vertical surface.  The road descended over three thousand feet from the tunnel to the valley floor approaching Milford Sound, and every curve of the hairpin road revealed a dozen more waterfalls, some of them thundering and wide, and some as delicate as the stream from a faucet.

We eventually reached the valley floor, despite the constant inclination to pull over for a photo. I was so anxious to see the sound itself that we bypassed The Chasm, a dramatic rocky gorge, and kept driving. My expectations were high—everyone in New Zealand agrees that Milford Sound is a must-do, and all the guidebooks call it one of the most beautiful places on earth. I was nervous that the view would disappoint me, that it couldn’t possibly live up to the hype.

Coming around the final bend in the road, the sight of Milford Sound laid out in front of us shattered every expectation I had. Even hyperbole falls short of capturing a view like that. 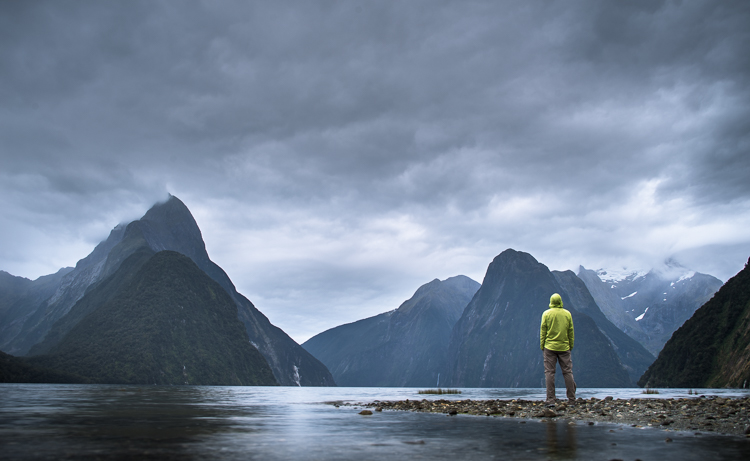 As we boarded a cruise that would take us the length of the sound to the edge of the Tasman Sea, I did wonder how it would look on a sunny day. The normally vibrant trees and plants that covered every surface seemed dark and subdued in the gray light. The sound itself looked almost black. With the peaks receding into the clouds and waterfalls catching the eye at every turn, Milford Sound was cloaked in mystery. It could have been a painting, but the rain lashing my face, the smell of seawater, and the distant shriek of kea brought the scene to life. 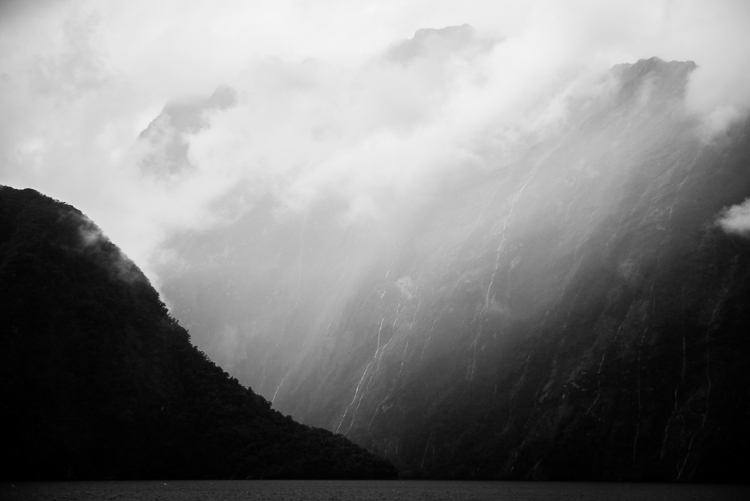 Our boat left the dock and nosed into deep water. The guide explained that the water of the sound looked so dark because it was stained with tannins from rotting plants during its journey down the cliffs. When it reached the sound, it formed a foot-deep layer of freshwater before being absorbed into the sea. He pointed out wide gashes of bare rock on the cliffs—places where the angle had proved too steep to support the weight of the forest, and entire thickets had gone tumbling into the water. Tree avalanches, he called them. 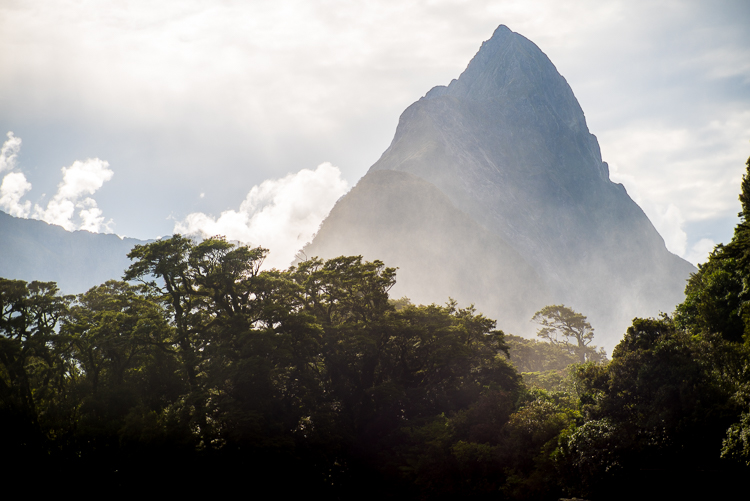 Triangular Mitre Peak emerged from the mists in front of us. In fact, the rain had stopped. The clouds were lifting to reveal more jagged mountains, surrounding the sound like thousand-foot-high walls.  The captain piloted the boat straight for the cliffs, until the prow (and a handful of brave passengers in heavy raincoats) sat directly under a waterfall. The guide brought a tray of glasses forward, filled them from the cascade, and handed them out—pure glacial water, fresh from the source far above our heads. As we drank the water, brown with tannins yet more fresh-tasting than any tap water I’d ever had, the clouds were breaking up to reveal patches of blue sky.

Our journey continued. A small white dot appeared on the horizon, drifting closer on the water. Believing it was a small fishing boat, I was shocked to hear our guide say it was actually a mega ship from a major cruise line. The towering cliffs had completely thrown off my sense of scale, but as the ship drew alongside and passed us, I craned my neck to count the decks—there were many. Milford Sound is a mile wide in some spots and reaches depths of over a thousand feet, so it accommodates ships of all sizes. The advantage of our tiny boat was, of course, its ability to get so close to the cliffs. We passed within a few feet of flat rocks where fur seals were relaxing in the sudden sunshine, and ventured into the path of many more tumbling waterfalls. 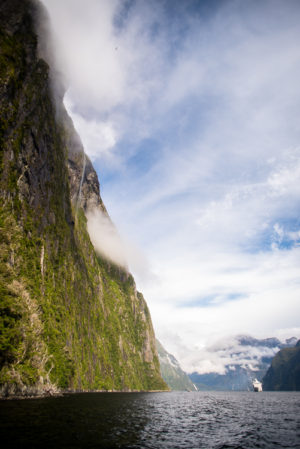 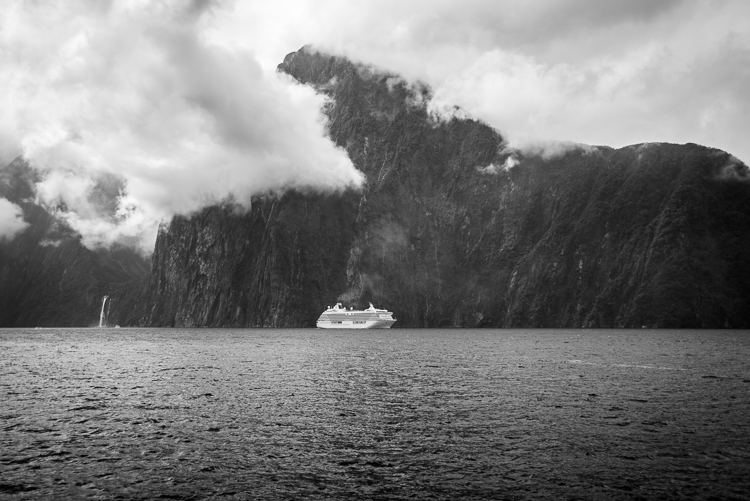 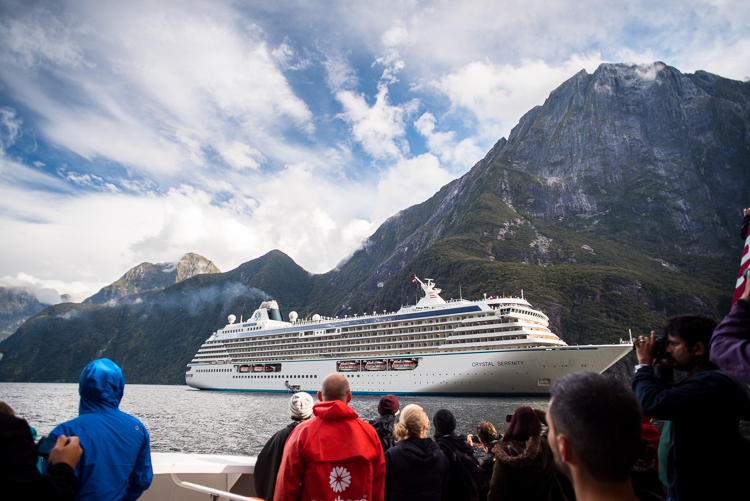 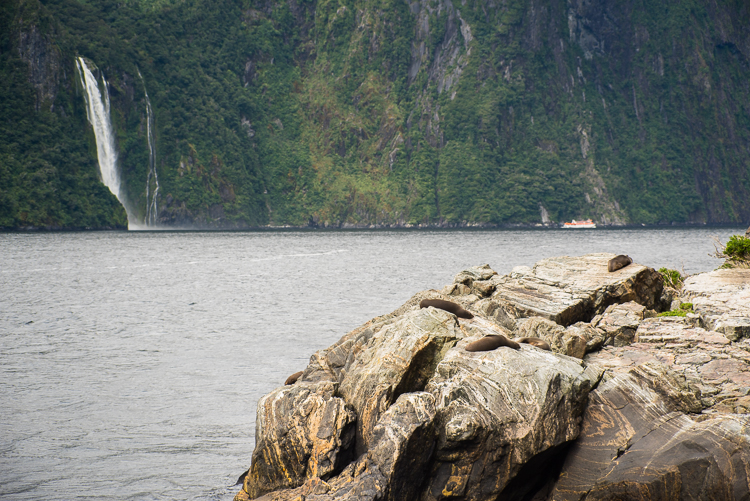 Eventually we reached Dale Point, a curve of land that juts into the entrance of the fjord and completely blocks Milford Sound from the Tasman Sea. It was because of Dale Point that the Europeans left Milford Sound untouched for so long—they literally couldn’t see it. Even Captain James Cook passed by unaware on his explorations of the New Zealand coastline, and subsequent whaling expeditions missed it as well.

But that doesn’t mean that Milford Sound was free of people. Facing Dale Point across the water, our guide pointed out a glittering rocky beach named Anita Bay. For hundreds of years, the Maori have been coming to Anita Bay to search for tangiwai, or bowenite, a clear green stone that makes beautiful jewelry and weapons. According to Maori legend, tangiwai are the petrified tears of a woman who was stolen from her husband, and the sad history of Milford Sound doesn’t end there. The Maori name of Milford Sound is Piopiotahi, or “one single singing thrush,” named for a bird that has since gone extinct. The story goes that the mythical god Maui went on a journey to win immortality for his people, accompanied by a piopio bird. When Maui was killed by the god of death, the grief-stricken piopio flew south to Milford Sound to mourn. 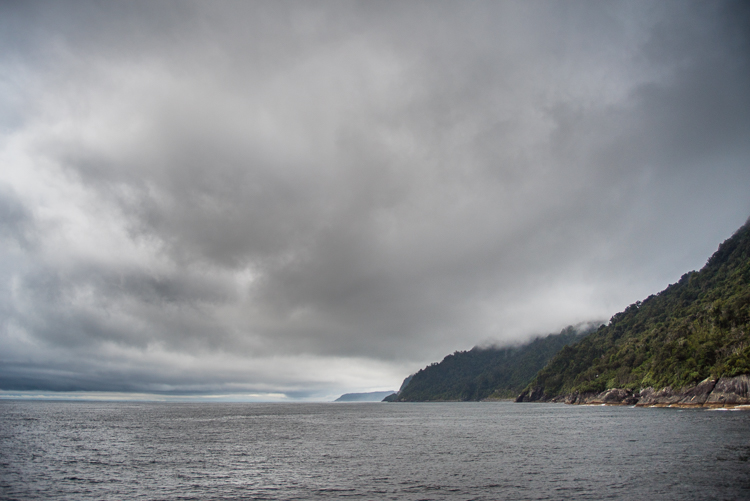 Ten miles from where we started, we reached the Tasman Sea and left the sad stories of Anita Bay behind us. The cliffs that had hemmed us in for the entire journey so far opened up, and we were hit with the full force of the “Roaring Forties.” This part of the world, between the 40th and 50th latitudes, is home to a westerly wind that doesn’t let up, often reaching gale-force speeds and pounding the southwest coast of New Zealand with wet and windy weather throughout the year. We had only the briefest of sojourns with the Roaring Forties. Our captain turned the boat around before we reached any actual swell, and we headed back toward Dale Point.

Between the sheltering walls of the sound, the clouds had scudded away and left behind a sparkling blue sky. The boat’s deck filled up, as all the passengers left the sheltered cabin and came out to enjoy the sunshine. We waved at passing boats, and enjoyed a cup of tea. By the time we docked, the memory of that morning’s rain was long gone, and it was easy to imagine staying at Milford Sound—becoming a kayak guide, or working on a tourist boat. We managed to get an overnight spot for the van, but when we woke the next morning to pouring rain, it was easier to leave. Our time at Milford Sound had come full circle. 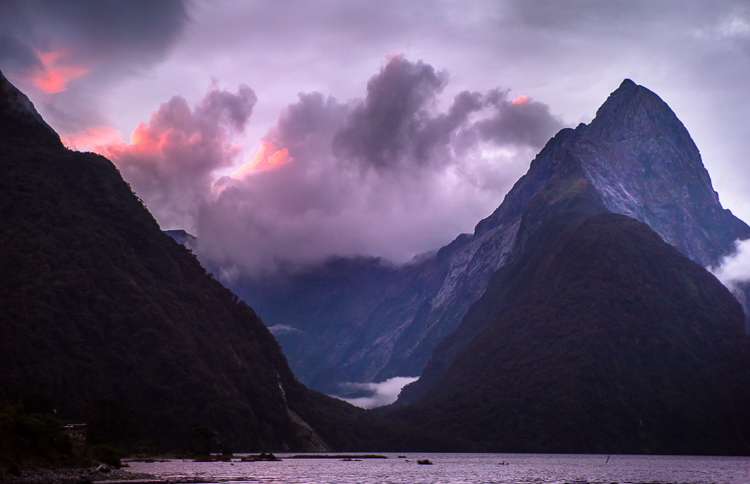 A few weeks later, we left New Zealand. Our trip back to the United States was somewhat indirect; we meandered through Southeast Asia, trekked the mountains of Morocco, and wandered from Eastern Europe to Scandinavia and the United Kingdom. All told, we spent ten months roaming the globe and saw landscapes that will remain with me forever. Milford Sound remains the most beautiful place I have ever seen.

Maine-ly wonderful: Our weekend Downeast
Some Other Beginning's End