My whirlwind trip to Cuba 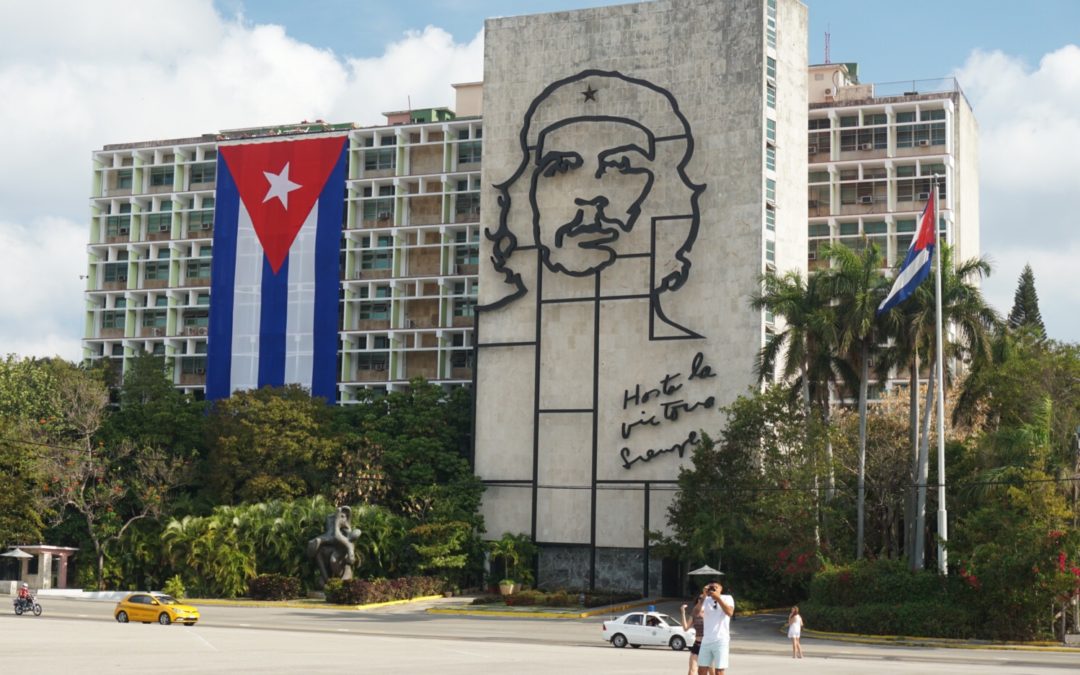 Last spring, I went to Cuba with a group of coworkers to check out my company’s group tours there. It was a quick trip—only five days—but it was a lovely introduction to Cienfuegos, Trinidad, and Havana.

At the time, diplomatic relations between the U.S. and Cuba were opening up. Lots of Americans who went last year did so because “they wanted to see what it was like before it was ruined,” presumably by the forthcoming flood of American tourists. I have complicated feelings about that—for one thing, Cuba has been open to tourists from around the world for decades, and they’ve already made an impact. Also, Cubans themselves would love for their country to have a more open relationship with the United States. The embargo hurts them. It seems incredibly selfish to say, essentially, “I want to keep Cubans’ quality of life tamped down so that I, a privileged American who can buy a Starbucks whenever I want, can experience what I think is a more ‘authentic,’ exotic Cuba.” 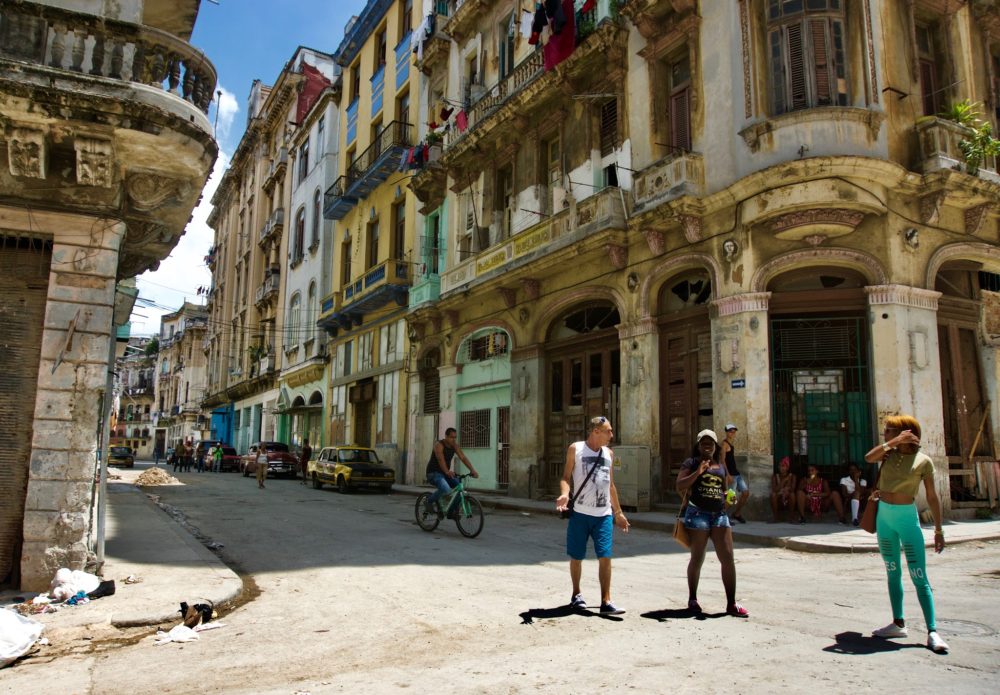 “And then I said, well what if I WANT to have a Starbucks on every corner?!”

Of course, now all of that is moot. We’re back where we were several years ago, with the embargo firmly in place and tourism to Cuba limited to People-to-People programs. It’s a real shame, because the hospitality, charm, and beauty of Cuba deserves to be shared with Americans. 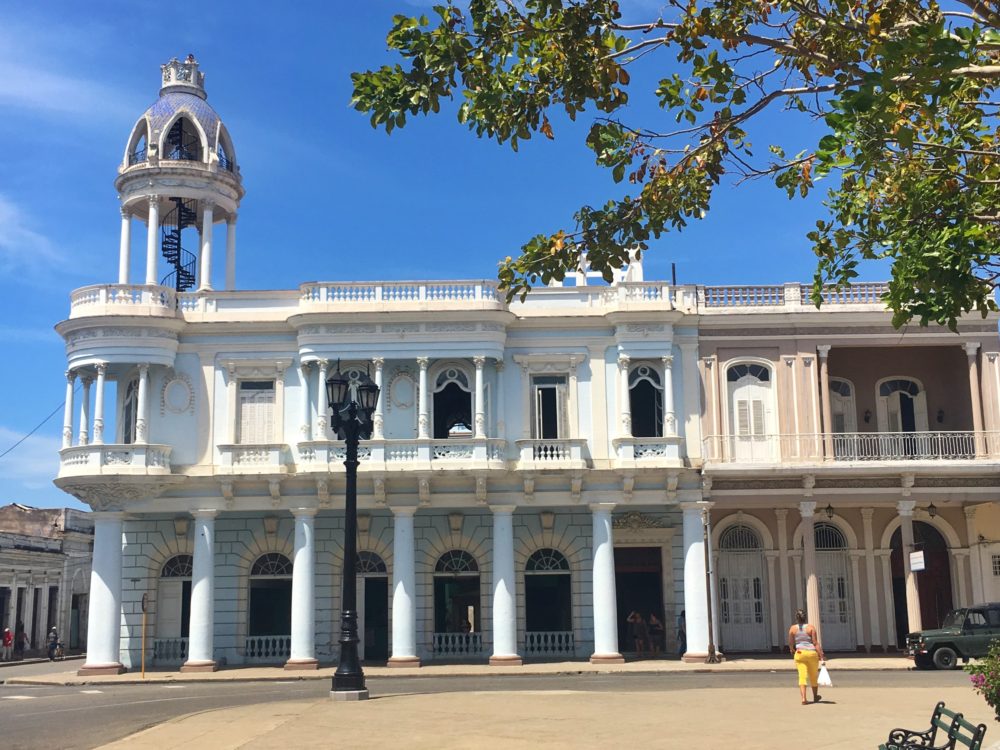 The colonial buildings that line the town square in Cienfuegos are absolutely stunning.

We spent only half a day in Cienfuegos, flying in late in the morning, going through Cuban customs (what an experience! The drug-sniffing dogs were hilariously unprofessional), exploring the town center, and having lunch before moving on to Trinidad. It wasn’t nearly enough time, but it was enough to see that Cienfuegos has earned its nickname “The Pearl of the South.” The town center is full of ornate, pastel, colonial buildings. It was the perfect introduction to Cuba. 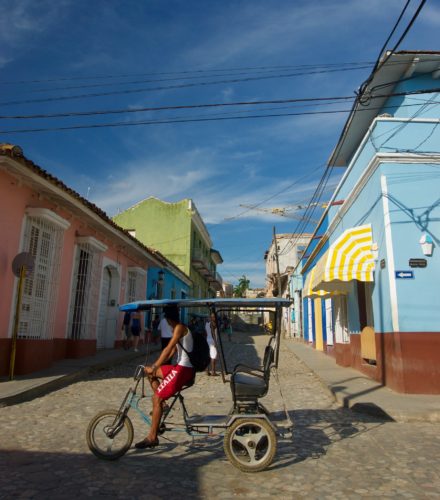 We spent three nights in Trinidad, and I could have stayed much longer. The buildings here were less ornate than Cienfuegos, but the colors were brighter, the streets were narrow and paved in cobblestones, and everywhere you went, people had their doors and windows open. I don’t know how many times people beckoned us into their homes. We were invited to dance, to look at art, to join in conversation. The hospitality is real, you guys.

Our days in Trinidad were packed full of fascinating cultural discussions. We met with a practitioner of Santeria, the Caribbean religion that fuses Catholicism, the Yoruba religion of African slaves, and local indigenous beliefs. We spoke with artists and musicians. We ventured into the nearby Escambray Mountains to a coffee plantation, where we met a multigenerational family of farmers. We even joined in the day’s work at a basket-weaving collective. 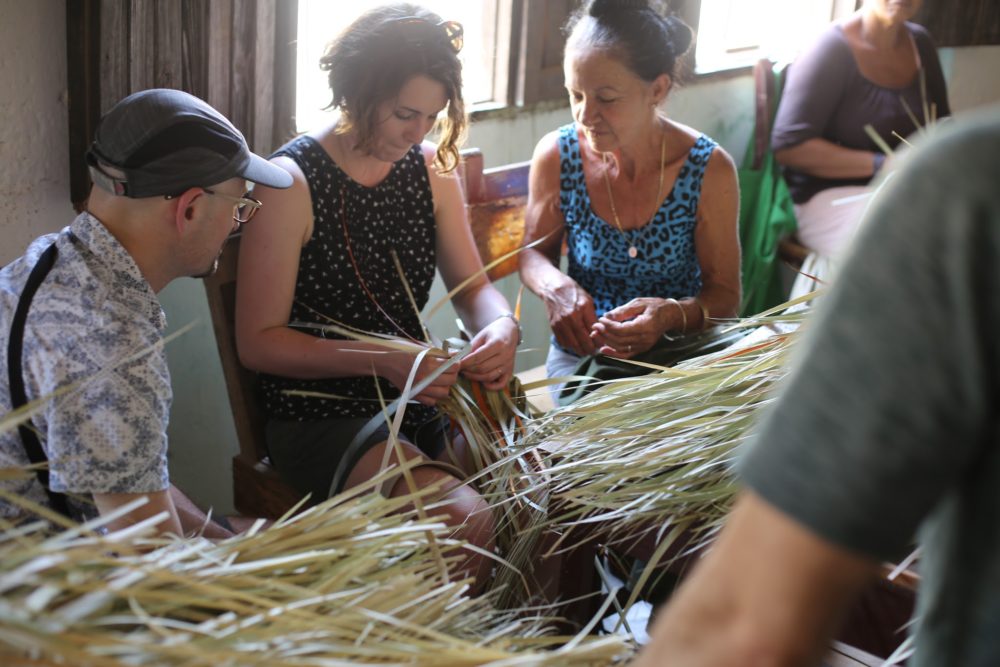 Bless this basket-weaver and her patience with me. I’m not quitting my day job.

I fell in love with Trinidad. It is truly a must-see for visitors to Cuba. There is so much to do and see in the town center. There are some amazing places to stay, thanks to the extensive network of casas particulares, or homestays. We visited one that was full of gorgeous antiques and even more gorgeous artwork, with a gem of a courtyard in back. The mountains nearby offer hiking, waterfalls, and coffee farms. And when you’re worn out from all of that, there is a beach outside of town. 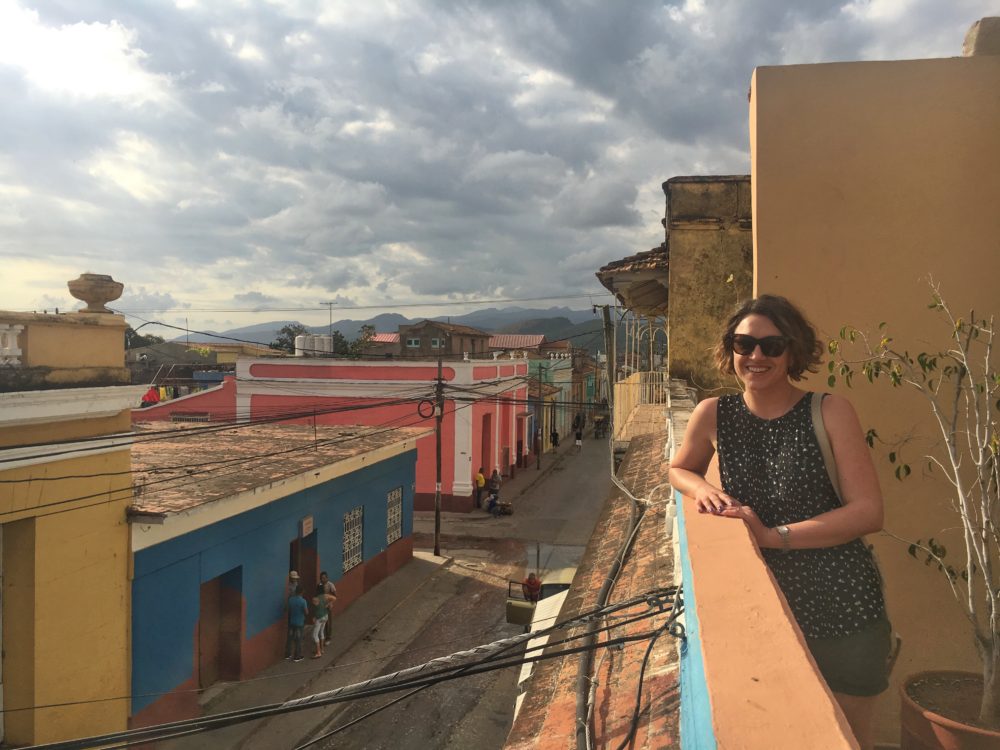 Beautiful Trinidad, with the Escambray Mountains in the background.

No visit to Cuba would be complete without a stay in Havana. We had only a couple days here, and spent most of our time in scheduled cultural interactions. This is actually a function of U.S. policy—People-to-People programs, like the name implies, are meant to bring Americans and Cubans together, and any People-to-People itinerary is packed absolutely full of these encounters. In Havana, we met a photographer, a choreographer and company of dancers, and multiple entrepreneurs who own paladares, or restaurants that Cubans themselves own, rather than the government. 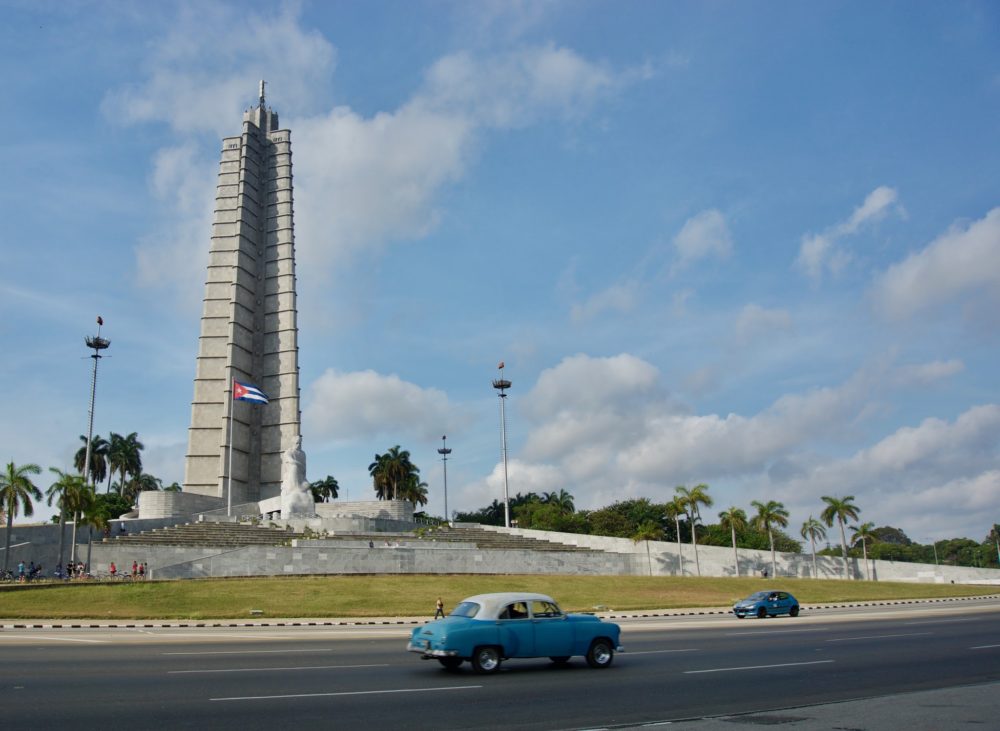 Fortunately, we had a couple hours free to explore Havana Vieja one afternoon. Havana had much more of a patina than Trinidad and Cienfuegos, apparently because harsh Caribbean storms blow saltwater well into the city and that ages the buildings’ facades. 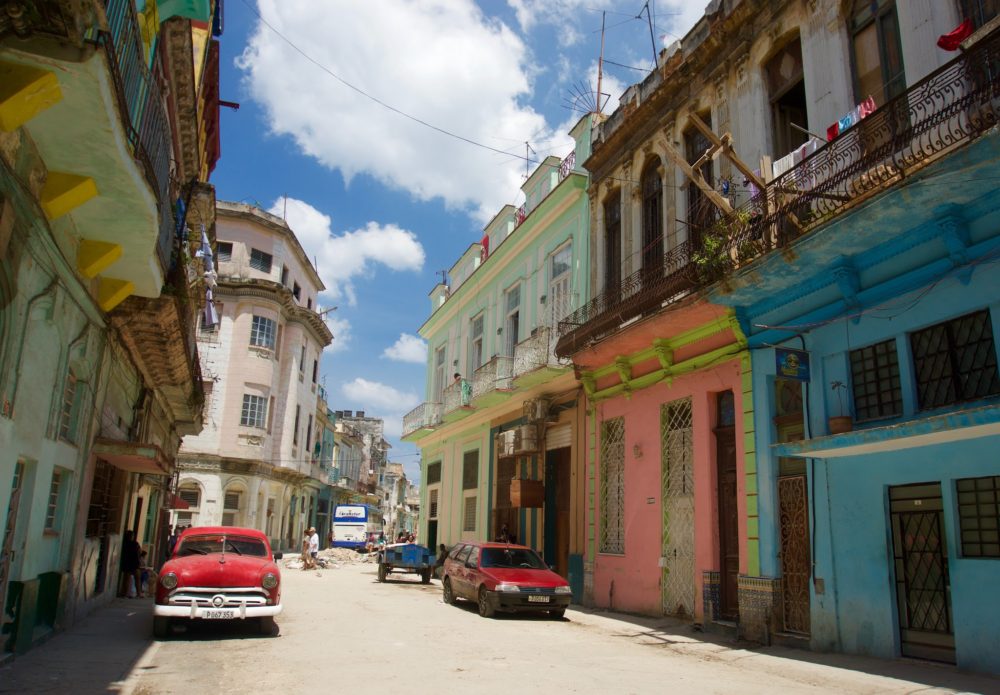 We stayed at the iconic Hotel Nacional, where Lucky Luciano, the Cosa Nostra, and the American mafia hung out in the 1940s. Like everywhere else we went in Cuba, it felt like it hadn’t changed in decades—which only added to the charm. In the lobby, we bought cigars that somebody’s ancient abuela hand-rolled right in front of us. We listened to and met with a jazz band in a shadowy old ballroom. And again and again, we returned to the patio for cigars and mojitos, with peacocks strutting past and ocean breezes caressing our skin. The hotel was an experience all on its own.

I came home from Cuba wanting to return as soon as possible. With the way things are going now, traveling to Cuba independently is more difficult than it was even two years ago—but I’m hoping that will change. Cuba and its people burrowed their way into my heart and they’re there to stay. 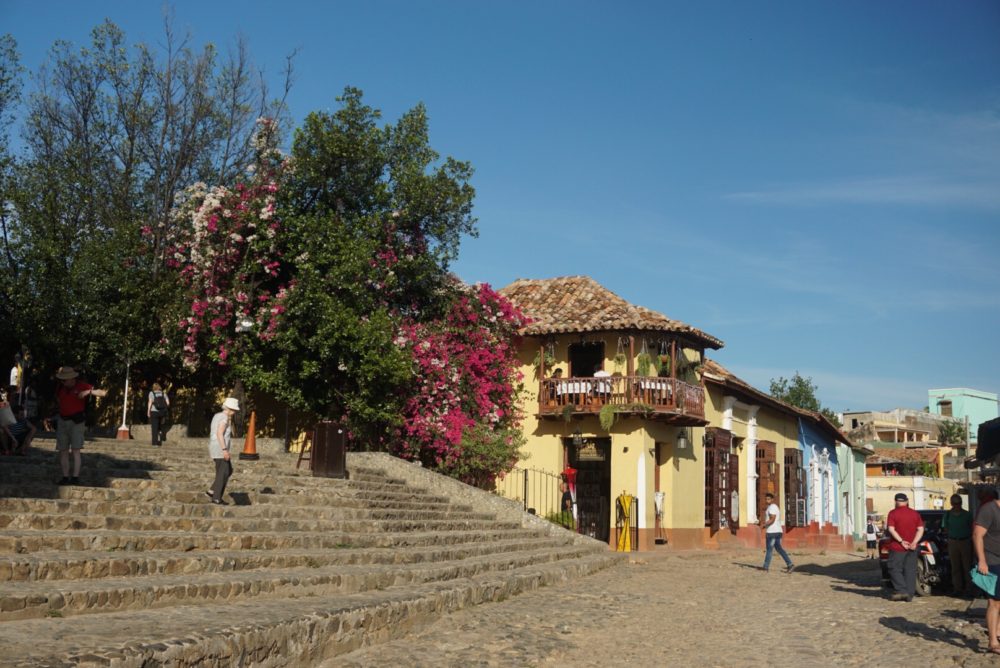 Serene by day, these steps in Trinidad turn into a hopping live-music venue after dark. We salsa-danced and had beers with locals here on our first night in Cuba. What an introduction! 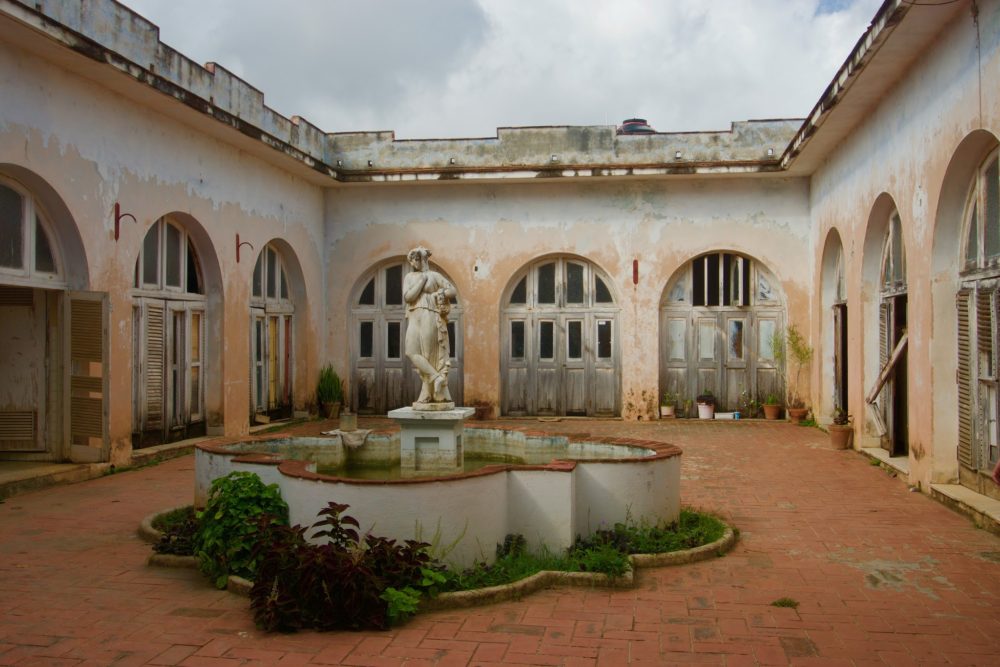 This is part of Trinidad’s public library, where we spoke with a Santeria practitioner. 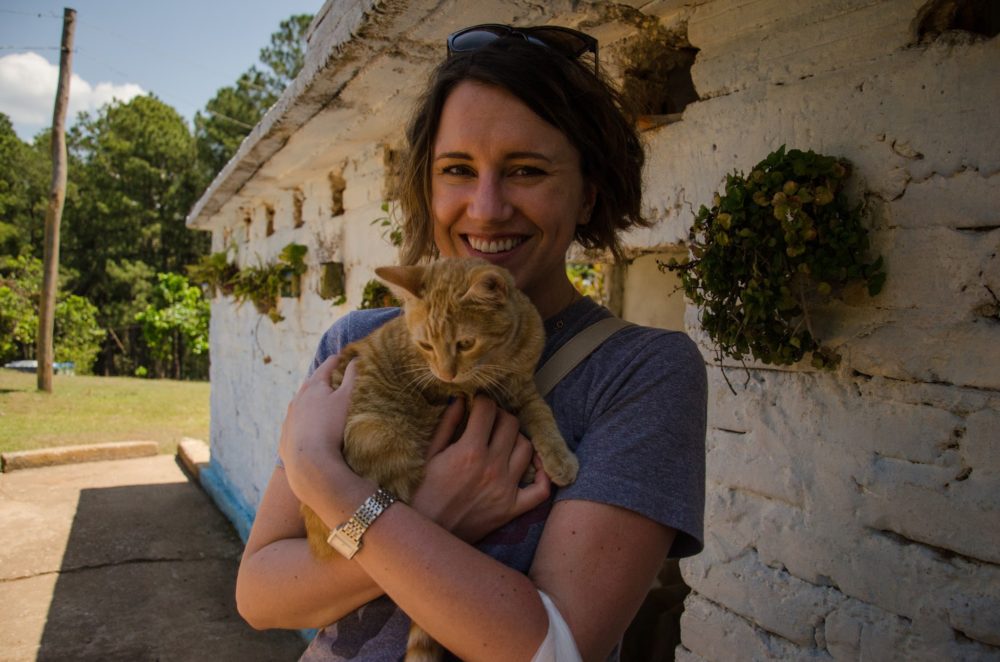 As much as I liked the coffee farmers in the Escambray Mountains, it’s possible I loved their cat even more.

Enjoying Cuban cookies on an art gallery’s rooftop in Trinidad.

Have you ever been to Cuba? Or any other place that’s not frequented by American tourists? Tell us what you thought in the comments.

Chicago, Chicago: Hamilton and more
2018 Travel Plans: The Road Ahead