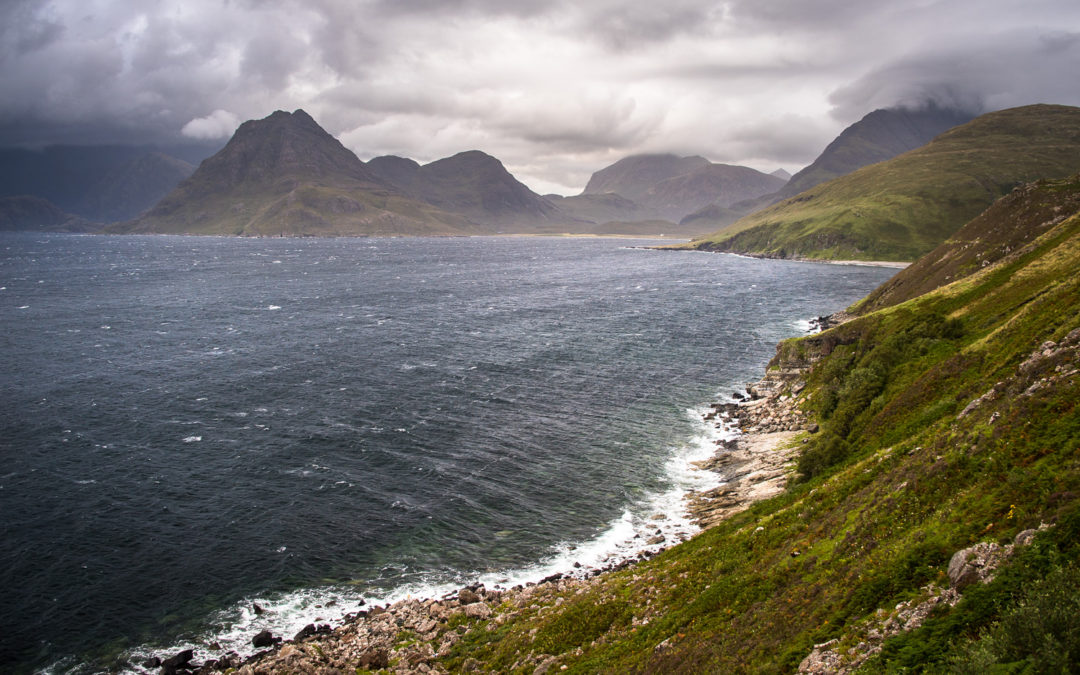 Rain pummeled the canvas above our heads, candlelight flickered on the walls, and the scent of campfire lingered on our clothes. Ben and I were camped out in a “bell tent” on the edge of a meadow, not far from the sea on Scotland’s Isle of Skye. As the shadows lengthened, we tuned into an evening story hour on the radio, someone reading aloud from a mystery novel. Eventually it got too staticky to understand and we let the sound of pattering rainfall take over. As I drifted off to sleep in our cozy queen bed (okay, we were actually glamping), I truly felt like I was living a dream. 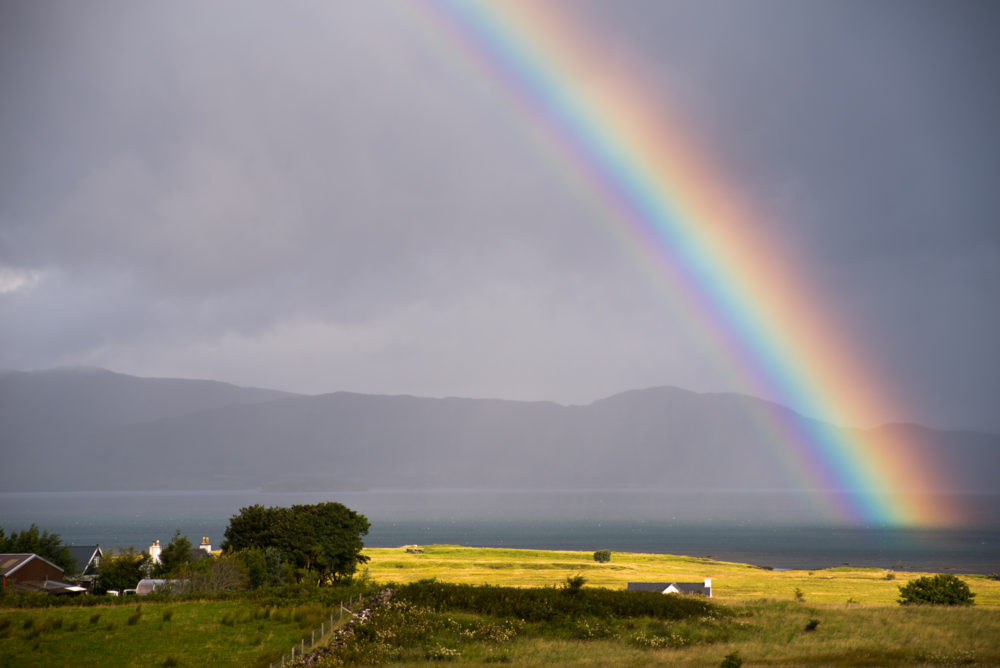 Dramatic weather on the Isle of Skye

Over the course of a few days on Skye, we met wonderful people and saw some of the most stunning scenery in the world. The weather was dramatic—but the furious, rolling black clouds, bouts of soaking rain, and passing mists only seemed to add to the atmosphere. It’s a moody place, but we still felt welcome. And now, nearly a year after our visit, Ben and I are still talking about those few days, and plotting how we’ll return to Skye someday.

For such a small island, there is an overabundance of things to see. Since the one-lane roads are windy, it takes awhile to get around. We divided the island in half, spending two days in the south and two days in the north.

Broadford and the South

We made the town of Broadford our first home base on Skye, and from there branched out to explore the south half of the island. 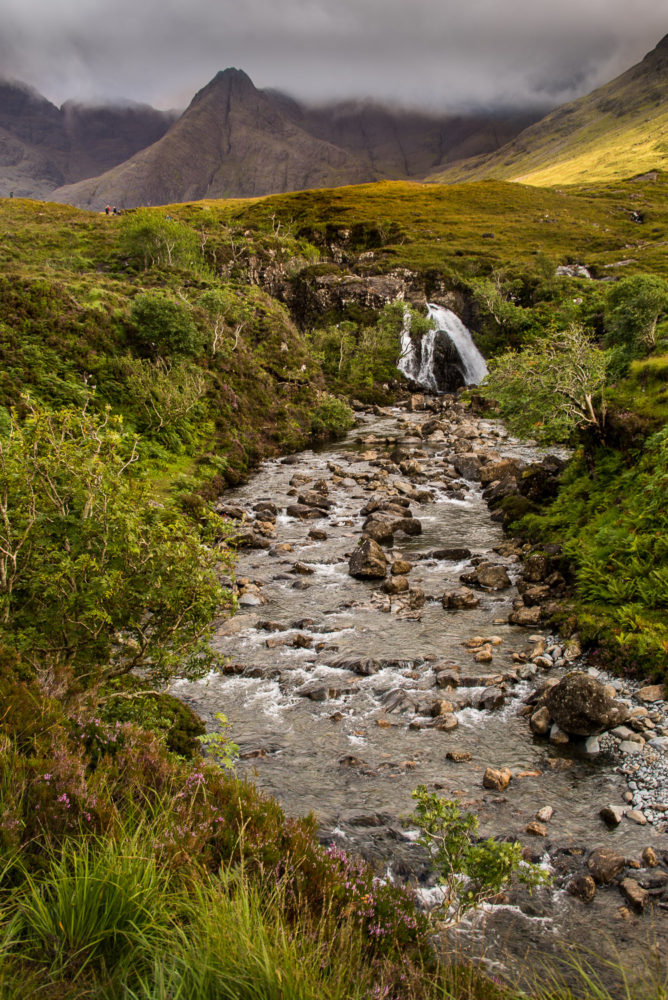 The Fairy Pools are almost magical enough to make me believe.

There is only one whisky distillery on Skye—Talisker—and it is a bit of haul to get out there from Broadford, the nearest “major” town. We made it there in fits and starts, with a lot of stops on the way there and back. I read somewhere that if you dip your head in the River Sligachan, you’ll be blessed with eternal youth, so of course we had to do that. Then there were the Fairy Pools, Skye’s big “must-do.” Normally, I find tourist attractions to be overrated and off-putting, but it’s hard to be cranky with views like this. Plus, most of the crowds stop at the pools themselves, and the views just keep getting better the further you hike. 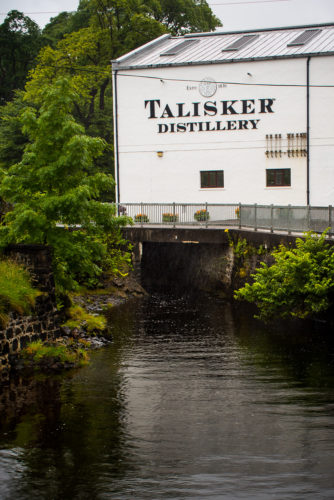 I can still smell the peat…that’s how strong this whisky is.

The Talisker Distillery itself was equally crowded, and in fact, we had to wait a couple of hours for a tour. If we had a chance to visit any other distilleries during our time in the Highlands, maybe we would have skipped it. But this was our only option, so we waited it out, and I’m glad we did. The whisky was unlike anything I’ve tasted before: salty and smoky, with only a hint of the gasoline flavor that I associate with scotch.

Technically not on the Isle of Skye, but close enough, is one of Scotland’s most photographed castles: Eilean Donan. I would use the phrase “can’t miss” to describe most things in the Highlands, and this is no exception. It’s popular for a reason. We drove out at sunset one evening, after the castle and visitor center had closed to visitors. We just wanted to see it. 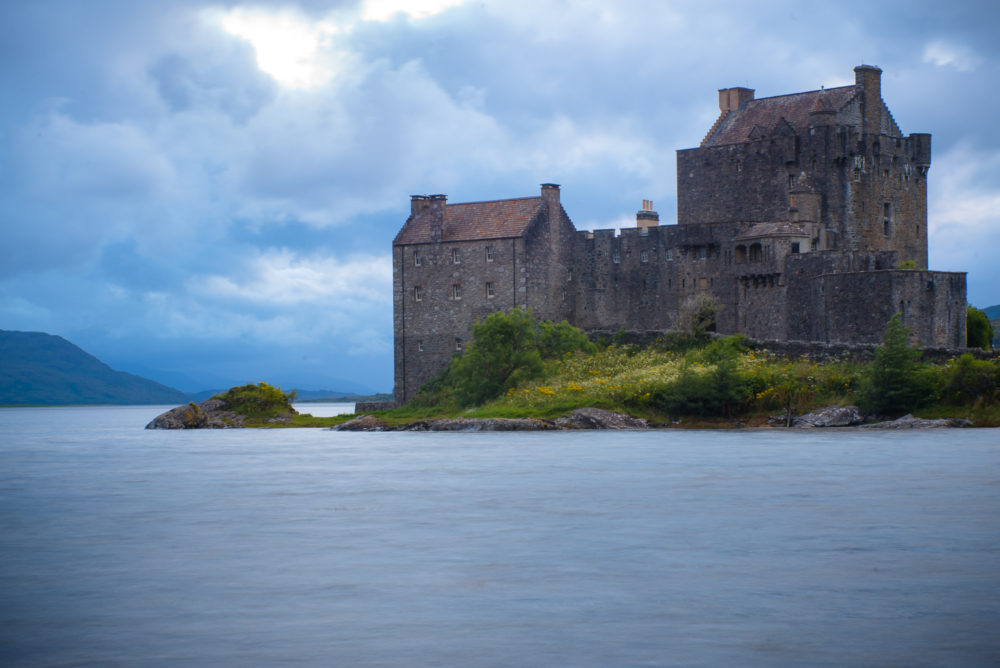 Slightly less popular (but back on Skye) is Armadale Castle. It’s only a facade these days, but the gardens are absolutely stunning, and the nearby Clan Donald museum is excellent if you’re curious about the history of Scotland’s clan system (spoiler alert: it’s fascinating).

Portree and the North 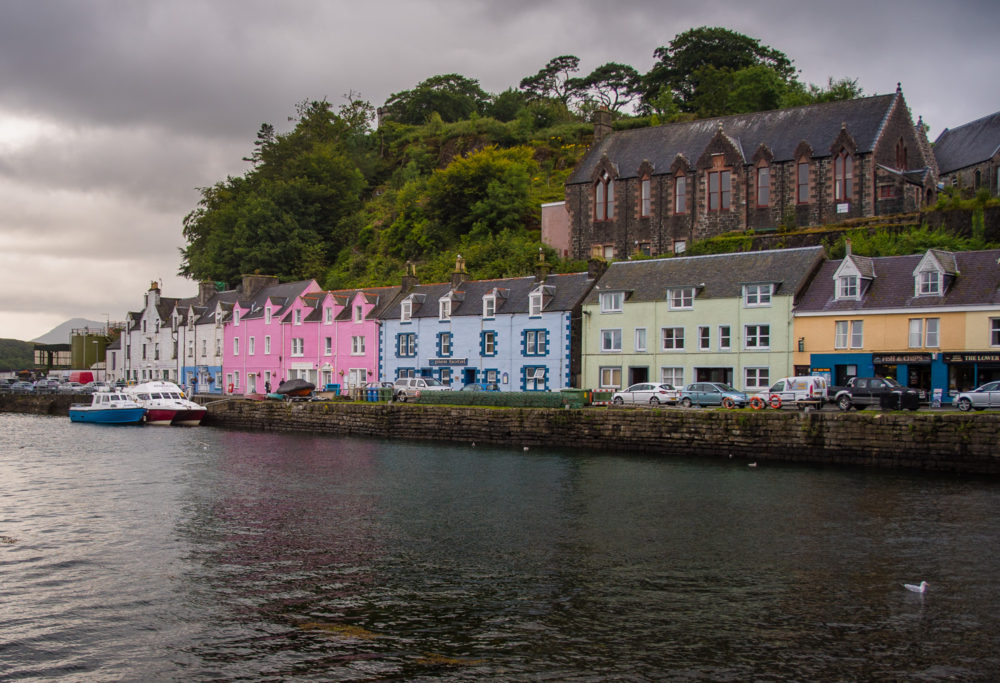 The northern half of Skye seems to get more attention than the south. Its biggest town, adorable Portree, is up there, along with famous spots like the Old Man of Storr, the Quiraing mountains, and Kilt Rock. That said, it’s still uncrowded, windswept, and wild, especially if you know how to avoid the crowds.

One of Ben’s favorite ways to do that is hitting up tourist attractions at dawn, and when our alarm went off well before 5am, I dragged myself out of bed after him. I wasn’t about to miss sunrise at the mystical Old Man of Storr. A towering column of black rock, legend has it that the outcropping was formed when a giant was buried with his thumb sticking out of the earth. The spot feels exactly like the kind of place a supernatural being would be buried—especially given the weather we experienced on our visit. It’s a ten or fifteen minute hike uphill to get to a good viewpoint, and of course, when we got to the top, the heavens opened and a furious wind kicked up. We hunkered down behind a rock and got absolutely soaked. Somehow, the sun still managed to make a good showing through the clouds as it rose, but I took advantage of a break in the showers to run back to the car. Ben was up there for another hour snapping pictures. 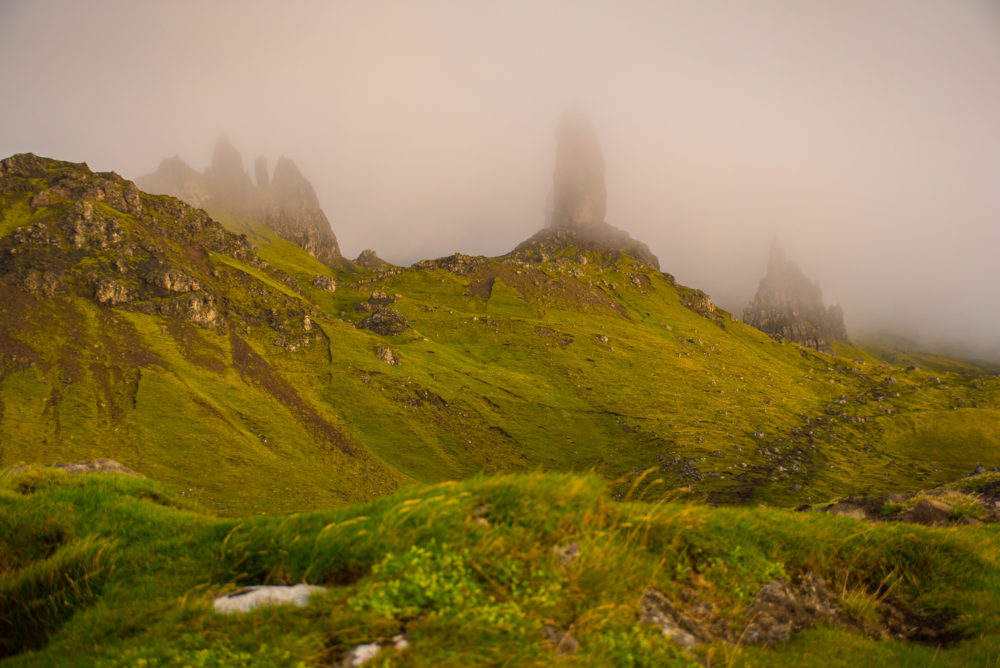 The Old Man of Storr emerges from the sunrise mist

We thawed out at Cafe Arriba overlooking the harbor in Portree, which has to have the most stunning view of any cafe I’ve ever been to. Then, we were off again, braving more showers for a drive to Kilt Rock, the Quiraing, and ultimately, Neist Point Lighthouse. 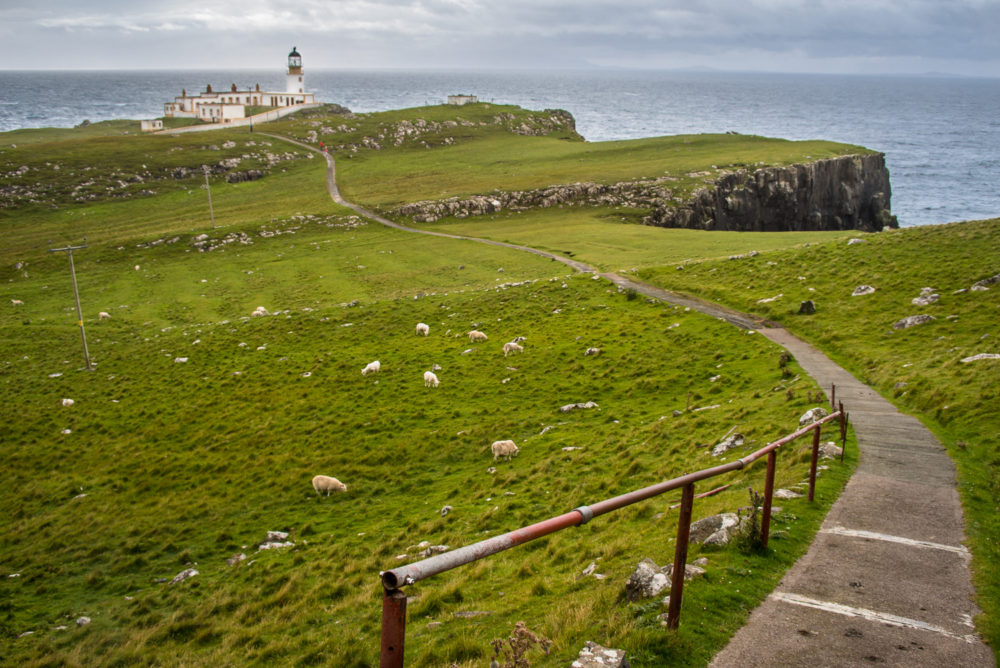 On the path to Neist Point

Neist Point was stunningly gorgeous and felt like the end of the world. The forbidding aspect wasn’t helped by the fact that there was an active Coast Guard rescue underway, helicopter and all, during our visit. Now this is camping.

I am all about glamping. I’d love to pretend that I’m some backcountry whiz who loves carrying a 30 pound pack for ten miles, but it’s not the case. If I can roll out of my car, get all the benefits of camping, and then drift off to sleep in a queen-size bed, I’m literally a happy camper. So I was thrilled when Skye Eco Bells had an available bell tent for half our time on the island. The tent itself was absolutely lovely, but the amazing greenhouse shower and cozy kitchen shack were amazing too. I wanted to move in permanently after our brief stay.

2018 Travel Plans: The Road Ahead
Our Highlands Adventure