Driving on the other side of the road 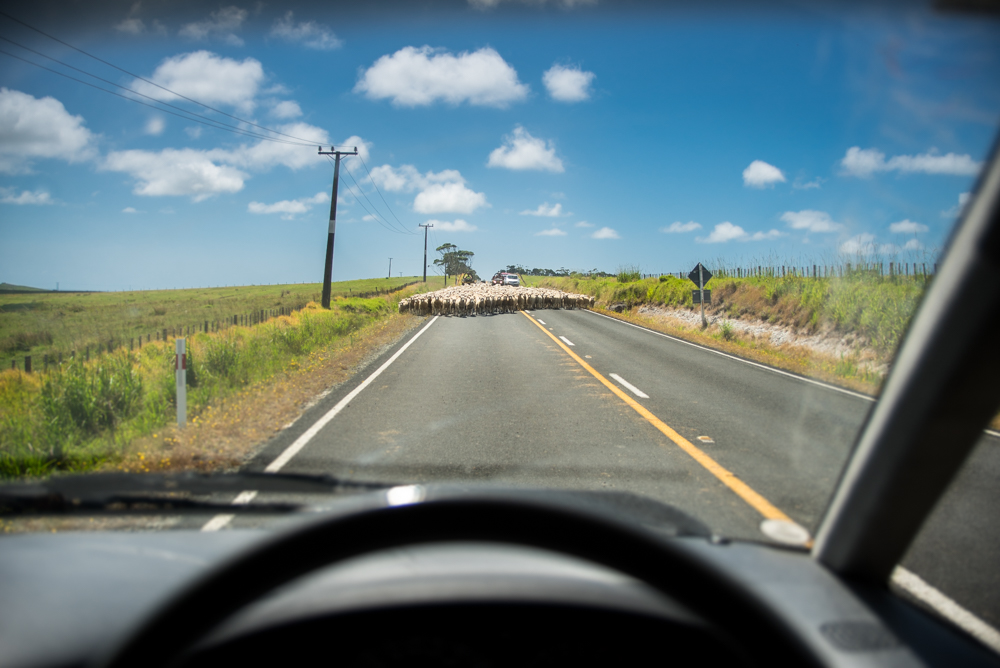 “Would you like to take it for a test drive?” Omer asked, eager to move along the inspection.

I hesitated for a minute. In the months leading up to arriving in New Zealand, every time I mentioned to an American friend that Jenna and I were planning on buying a van and road-tripping our way around the country, the first question was always the same: “They drive on the other side of the road down there, don’t they?”

I’d usually respond with some sort of affirmation and then make a joke about how it would be an adjustment and part of the experience, partially to acknowledge and ease their concern and mostly to ease my own apprehension.

“Um, yeah, that would be great,” I finally responded to Omer. I walked along the right side of the car, hopped in and was relieved to find an automatic transmission.

I had been trying to mentally prepare myself for the reversal. Walking around Bangkok and Auckland I was vigilant about looking right first, then left. Of course, I already thought I’d abolished 25 years of experience in one afternoon walking around Bangkok, only to be surprised that I was sitting behind the driver on the right side of car on the way to the airport later that same day.

The trouble lies with the instincts. The muscle-memory that I’ve been unintentionally programming myself into. That is what I am most worried about. When there are cars and lights and signs and multiple lanes, I thought all this would lead to reversal overload; instead the opposite is true. The most confusing times are when there are no indicators, no traffic or arrows or signs to tell me what direction is correct.

It is the same sensation I’ve felt trying to adjust to living on the road. Basically, as soon as I entered Elementary school, the path for life has been laid out and ingrained as follows: Go to school for 20-24 years, get a degree, get a job, then another job, maybe another and another, until you have enough money to stop having a job and by then, you’ll be wise enough to know what to do with yourself without the employment crutch. This is the fallback plan I always referred to when making big life decisions. The life-choices muscle-memory reverted back to the instincts rooted in this plan. Problem is, I’m now going the opposite direction on this path.

For the first time in my life, there are no road-map indicators of what I should be doing and where I should be going. Out here in the land of the unemployed-by-choice, our lane is free of traffic. Obviously, that was part of the appeal and a huge reason for why Jenna and I decided to quit our jobs and set off around the world. Turns out, I give into the old instincts of a “regular” lifestyle. I start getting paranoid about decisions that would be detrimental to me in my old life, that are irrelevant or unnecessary in my current life. I freak out about spending too much money and not having an income to compensate for it (even though we have a set daily budget and savings for EXACTLY this reason). I start worrying about where we’re going to live when we get back (even though that decision is MONTHS and MONTHS and MILES and MILES away!). I worry about the uncontrollable future; instead I need to switch sides and focus on the incredible present.

It’s easy to be euphoric and excited for what’s next when we turn the corner to some new incredible vista (never-ending in New Zealand). It’s a lot tougher on days where those moments don’t happen. Or when things go wrong. I don’t know what my exact goal was for the year when we left the States, but now I think it’s becoming clearer. This trip is teaching me to face my fear of the unknown, and embrace it. Embrace what the world is giving me now, and stop worrying about what the world might dish out later.

Back on our test drive, I turned the ignition. Checking that the pedals were in the same (relative) position to the cars back home, I shifted the van into drive, spun the wheel hard to the right, u-turned, and took a left onto Queen Street. The drive lasted less than 5 minutes, peppered with inquiries about the van itself and the travels Omer and his friends were on (three of them, all finished with their eight-year tours with the Israeli military, were traveling for a year to finally enjoy the world. They were headed to Thailand next). After a clumsy, but uneventful loop around the hotel (including an unplanned u-turn in a dead end street), I eased the car back into the parking spot, relieved to have survived driving on the “wrong” side of the road for the first time. Jenna and I thanked Omer and his friends for bringing the van by, told them we would be in touch as we had just started looking at vans, and headed back up to our room.

We didn’t end up buying that van. By the end of the next test drive, driving on the “wrong” side of the road was no big deal.