The Tongariro Alpine Crossing on a bad day 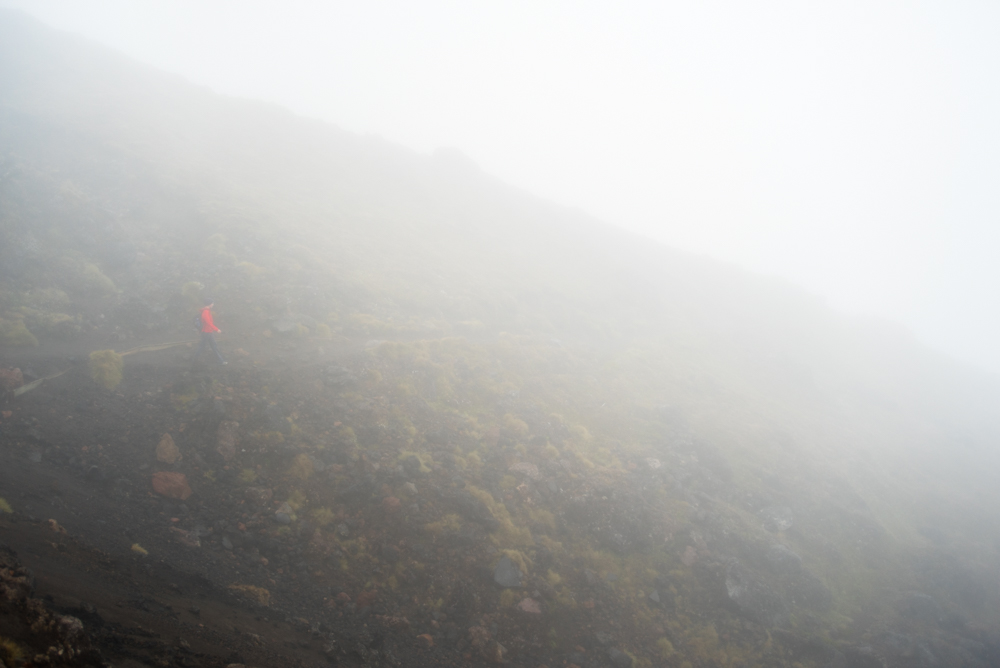 The Tongariro Alpine Crossing has been called one of the world’s best day hikes. It winds between two recently active volcanoes, Mt. Tongariro and Mt. Ngauruhoe, and passes bright blue lakes, steaming vents in the earth’s surface, and eerie black lava fields. To many people, doing the crossing is a no-brainer if you’re passing through the central North Island of New Zealand.

For us, it was a slightly…different experience.

The afternoon before we planned to do the hike, we arrived at our campground near Tongariro National Park to find that everything around us was wreathed in mist; the peaks were invisible. We had carefully chosen our day for the crossing based on a forecast of “partly cloudy,” and sure enough, before sunset the clouds lifted a bit to reveal a slope that seemed like a living thing–everywhere you looked, steam curled and billowed from vents among the rocks. We were optimistic that the remaining clouds would break up and blow away overnight. 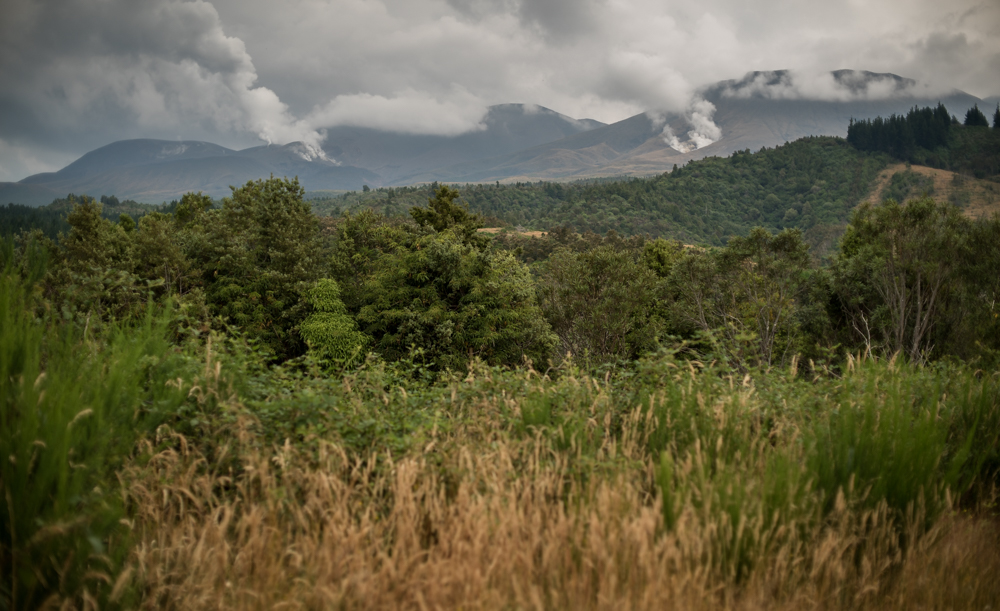 Instead, we spent most of the night wide awake, listening to torrential rain pound the roof of our van. Sunrise revealed that, while the rain had stopped, the landscape was even gloomier than the previous day. Ben was hopeful that the mist would burn off, so we got on the shuttle that would take us to the trailhead. Occasionally a huge rock or tree would loom up along the side of the road, but other than that there was nothing to see out the window. We arrived at the trailhead, and lacking any other option, began to hike.

At first, Ben’s optimism seemed well-founded, because the mist was lifting. We walked along a stream and as the trail pitched upwards, the black, rocky slopes closed in on both sides–it was like we were hiking into the belly of the volcano. We could see the top of Mt. Ngauruhoe to our right, which had starred as Mount Doom in Lord of the Rings, and it seemed especially forbidding with the cloak of mist around its base.

When we started up a steep section of the trail, my hopes fell. We were walking straight up into a low-lying cloud. Eventually we could only see the rocks on either side of the trail and the only hint that we weren’t alone was the sound of voices all around us; the mist did strange things with noise so every voice sounded much closer than it was. You would hear people approaching for a long time before they actually appeared.

Eventually, we reached the top of that first steep ascent and began to cross a huge crater between Mt. Tongariro and Mt. Ngauruhoe. It was like a scene from the moon. The high walls kept some of the clouds at bay, so we could see exactly how immense the crater was. Eventually, we reached the other side and headed back up into the clouds; that was the last clear view we had the whole day. 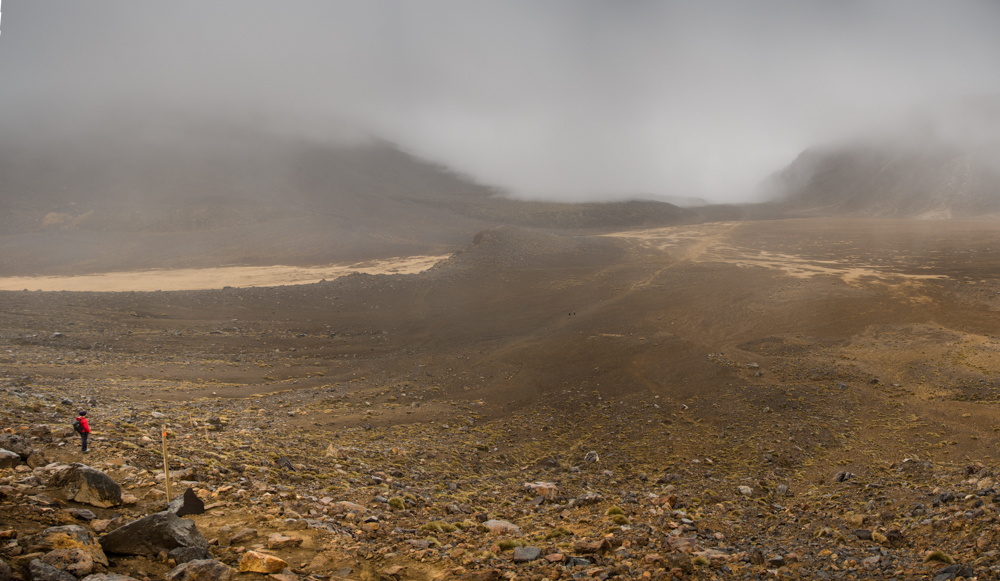 The final “clear” view of the day. At least it was a good one! 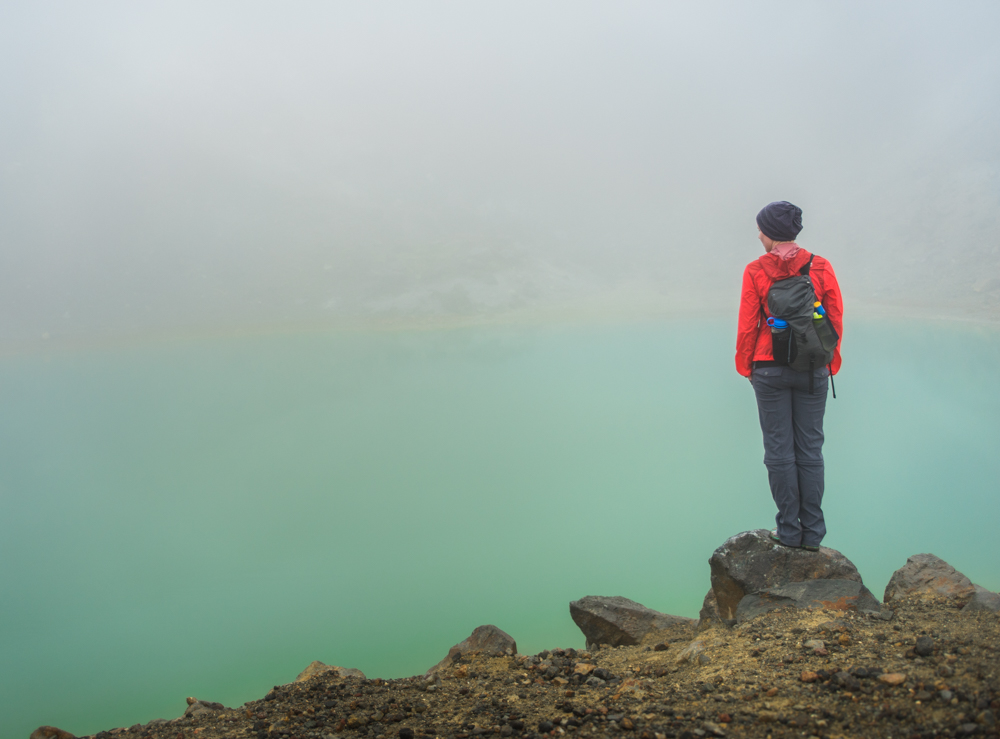 We soon reached the high point of the trail, just under the summit of Mt. Tongariro. Heading down the steep incline on the other side, we were surprised when out of the mist, an acid-green pool emerged from the mist. Luckily, no amount of cloud cover could obscure the intense color of the Emerald Lakes, one of the most famous sights on the Tongariro Crossing.

We weren’t so lucky at Blue Lake. We peered over the ridgeline and could see nothing but gray in all directions, so we pressed on and began the long, slow descent to the end of the trail. I normally love going downhill, but the mist was playing tricks on us. It felt like hours were passing, but every time I looked at my watch, it had only been a few minutes. With nothing to see but a few feet on either side of the trail, it felt like we were passing the same rocks and patches of grass over and over. My toes began to ache from the repetitive motion of taking a step and sliding forward in my shoes, thanks to the steep incline. The optimism we had felt getting started was long gone; in fact, it felt like we had been walking for days. 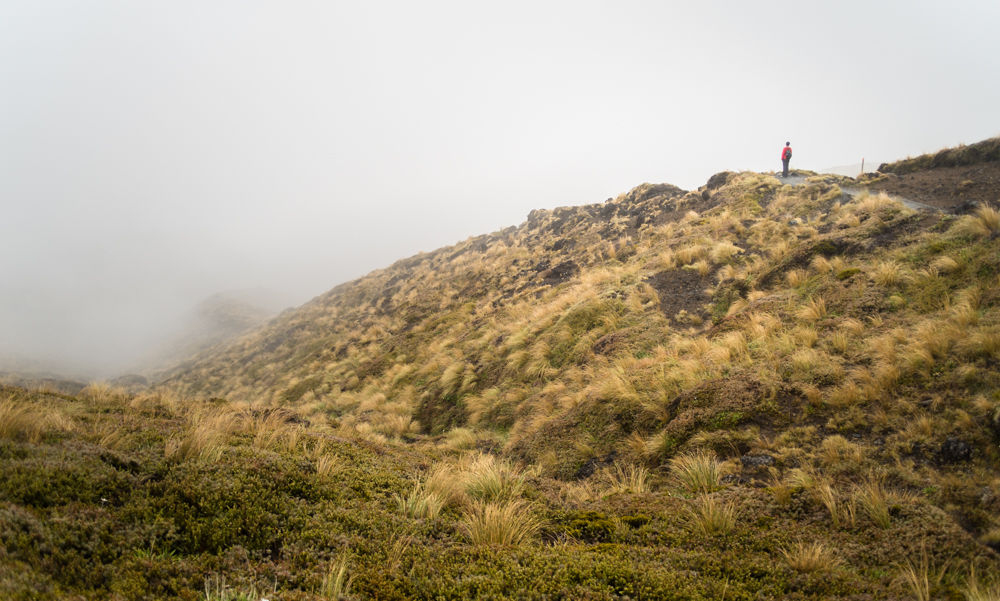 Of course, everything comes to an end eventually. It wasn’t even noon when we passed into the jungle on the lower slopes approaching the car park. We reached the end of the trail in five hours, much quicker than we had anticipated, thanks of course to the fact that we had never stopped to take in the (lack of) views. We were both sopping wet from literally walking in the clouds for five hours, so we treated ourselves to a sauna and hot shower at a nearby hotel–maybe the best $10 we’ve spent during the whole of our trip.

All in all, walking for half the day was a much better use of our time than sitting in the car, which is what we normally would have done in bad weather. But I won’t lie, walking 20 kilometers and not seeing any of the views that make this the best one-day hike in New Zealand was a huge disappointment.

Spoiled Silly: Eating and Drinking in Wellington
Driving on the other side of the road