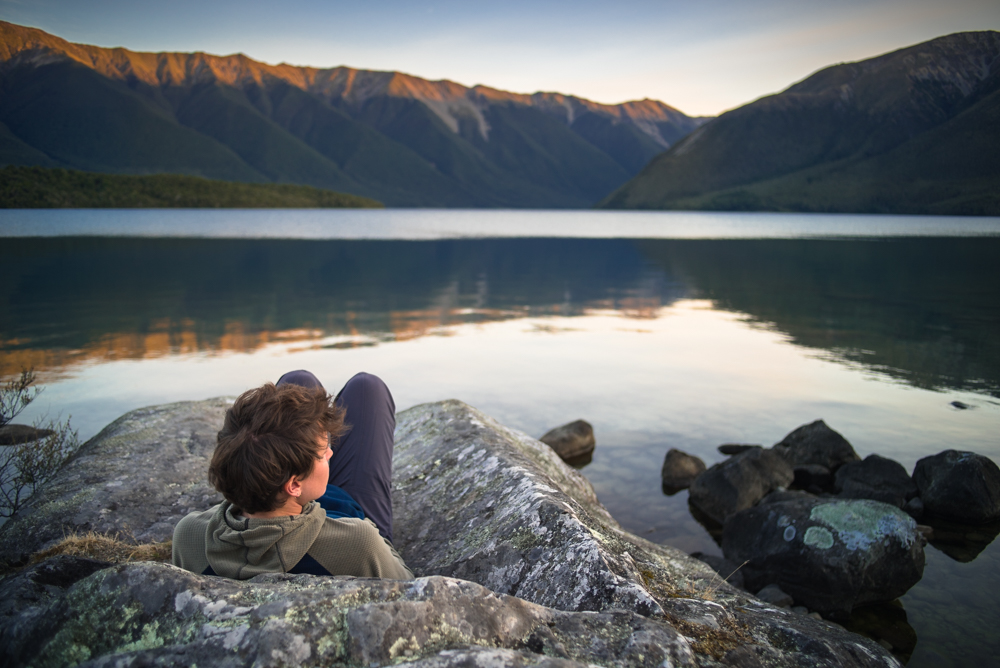 After a month on the beaches of the North Island, Ben and I were ready for mountains. So after crossing Cook Strait and stopping for a leisurely wine tasting in Marlborough, we set our sights on Nelson Lakes National Park. It was conveniently halfway between wine country and the West Coast, our next major destination. 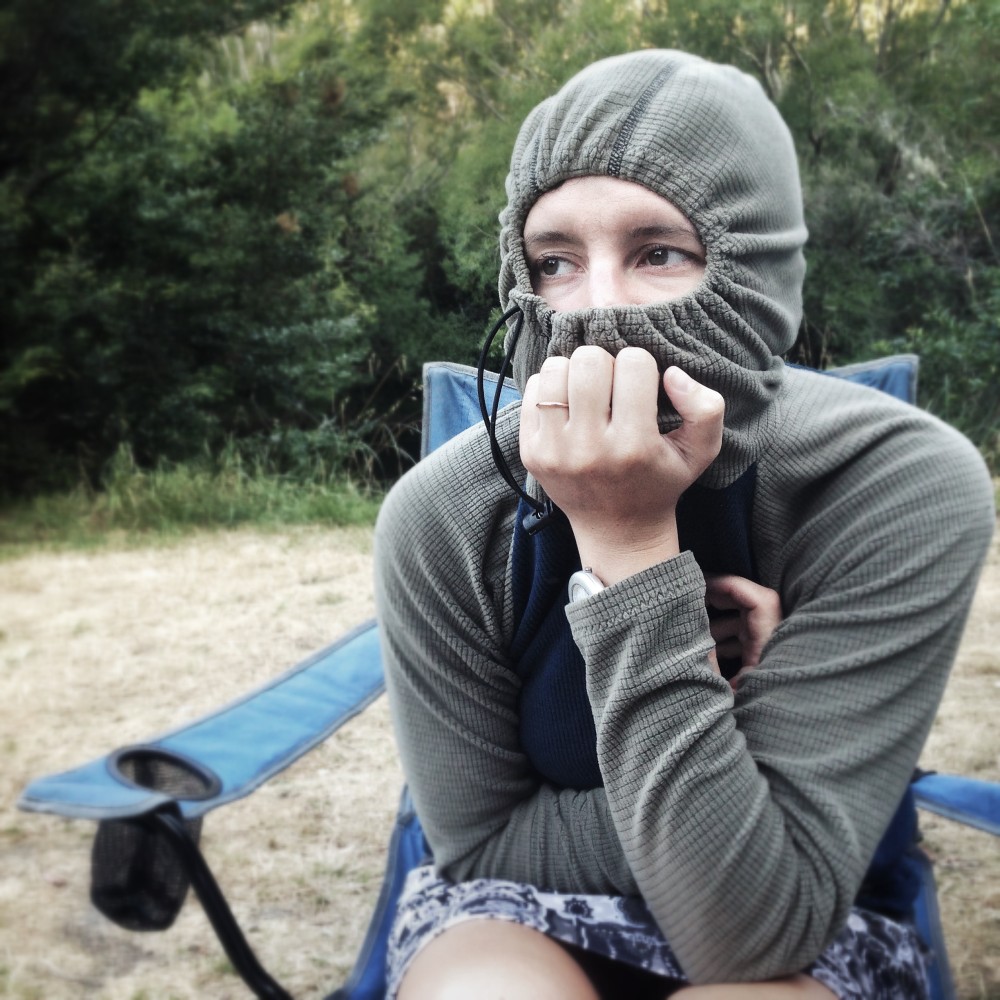 Only defense from the swarms!

Almost immediately after leaving the vineyards in our rearview mirror, I drifted into a nap (definitely had nothing to do with the thirteen wines we tasted). When I woke up less than an hour later, the flatlands had disappeared, replaced by a winding river valley and rugged grey peaks. The scene was so familiar that for a second, I wondered if I had fallen asleep in New Zealand and woken up in Colorado.

The illusion of being back in the Rockies didn’t fade the longer we drove; it only began to look more and more like home. We stopped for the night at Kawatiri Junction, a historic railroad crossing at the intersection of two rivers. And the second I got out of the car, I met the only thing I have found to dislike about New Zealand so far: sandflies. We haven’t got anything like them back home, so I didn’t yet know that I needed to put on clothes that covered my arms, legs, ankles, feet—everything, basically—and put DEET on any bare skin. I just put on a hoodie and hoped for the best (my legs were covered in bites the next day, and sandfly bites make mosquito bites look and feel downright pleasant).

Since we were back in the mountains, it seemed the only appropriate thing to do was hike to the top of one. The next morning, we set out for the summit of Mount Roberts, a big mountain that rises straight from the waters of Lake Rotoiti, in the center of Nelson Lakes National Park. The trail is a loop, with one direction significantly steeper than the other. Luckily we chose to go up the gentle side and come down the steep side; a lot of people we passed coming the other direction looked miserable! 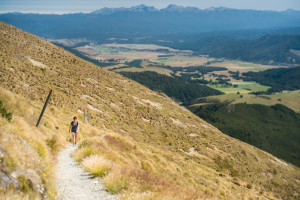 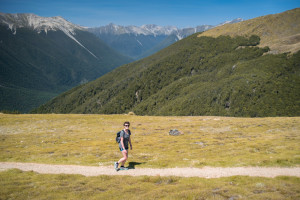 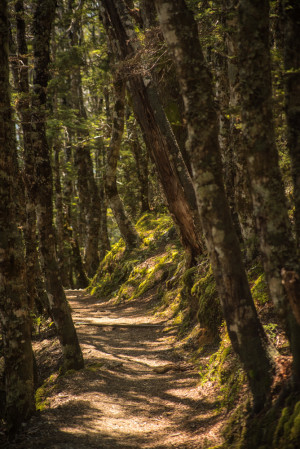 Once we got onto the upper ridge-line, the views were beautiful and the trail was nearly flat, so the hike became almost relaxing. There are few better feelings than getting to the top of a mountain.

After we got back down to flat land, a treat was in order. Saint Arnaud’s, the only town in the park, is tiny, but it does have a general store that seems to stock every kind of ice cream bar you could dream up, plus ice-cold sodas, which is all you need for a post-hike reward.

Satisfied with our snack, we headed for the lake. The water might be freezing, but after you’ve summited a mountain and eaten an ice cream, going for a swim in a mountain lake seems like the only logical choice. We parked at our campground and then headed for the pier, but an unmarked trail leading off the road seemed to be calling our names. We followed it onto a tiny beach, deserted but for three black swans, with views of the entire lake stretching out before us. The water was definitely cold, but you’d be hard-pressed to beat the setting. 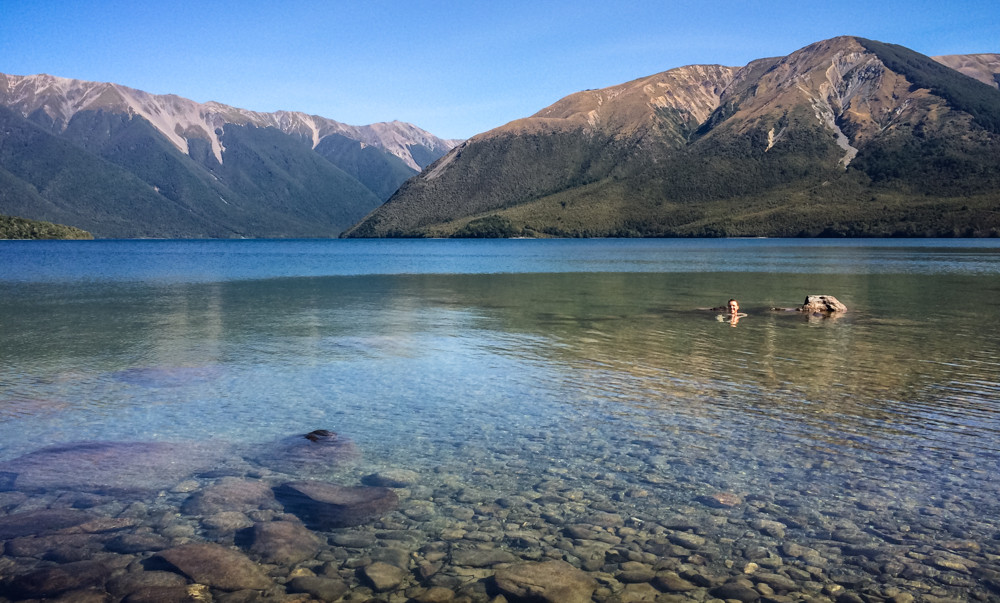 Nothing like a good immersive ice bath after a hot hike.

The simple pleasures of our day in Nelson Lakes—standing on top of a mountain, eating a well-earned treat, and having the whole lake to ourselves—are what make living in a van worth it. We’ve given up the security of full-time jobs and our daily budget is laughably small in this far-flung country where a cup of coffee costs at least $3.50. But it’s impossible to complain when you’ve got this kind of freedom seven days a week.

If only it weren’t for the sandflies.