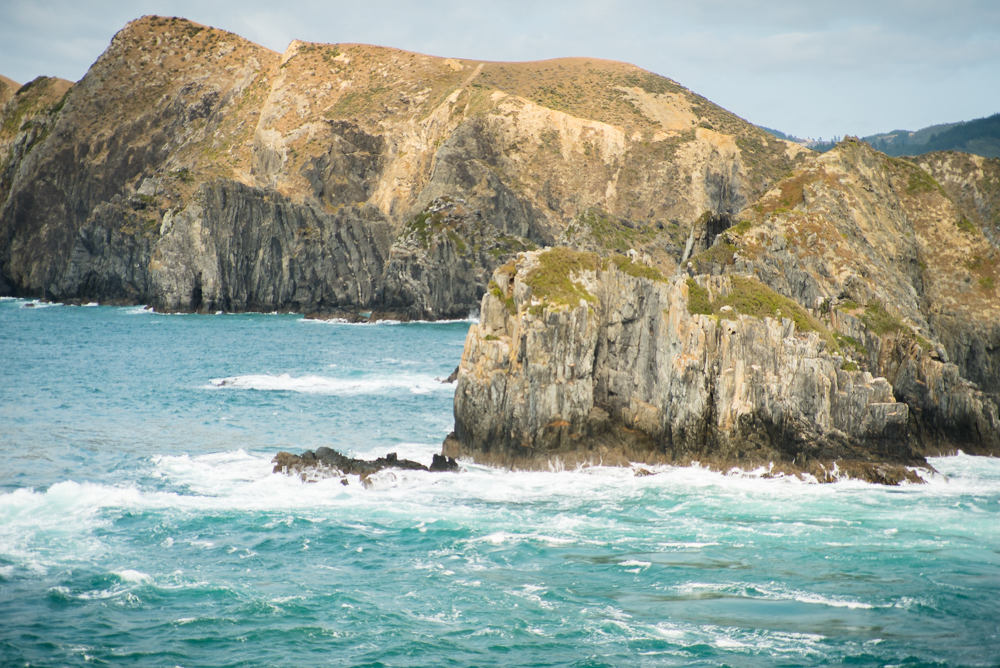 I’ll be honest, when I read that the ferry across Cook Strait was often a white-knuckle experience, I was more than a little excited. The thrill-seeker in me was hoping for a big swell; I wanted the adventure of cresting a big wave and plunging nose first down the other side, like this:

I don’t get seasick and the safety record of the Cook Strait ferries has been pretty spotless since the tragic sinking of the Wahine in the 1960s, so I felt like a little adventure would be ultimately pain-free. Ben, on the other hand, does get a little seasick, so I tried to hide my disappointment when we booked our crossing for the calmest day on the forecast. Of course, Nature had other plans, as she usually does.

The day before our crossing, we watched a ferry leave the safety of Wellington’s harbor. It was the kind of day that gave the Roaring Forties their name, with wind gusts that could knock you over, and you could tell almost exactly when the boat crossed that invisible line between harbor and open ocean. Ben described it pretty well here:

After watching this ferry get tossed around like a rubber duck in a terrible-two-year-old’s bathtub, we were pretty happy to head to the South Island tomorrow and watch the show from our campsite on dry land.

I got a little thrill just watching the ferry rock up and down, but I knew some people on board were probably feeling pretty miserable and I told Ben we were lucky to be leaving the next day, after the winds were supposed to have calmed down. We headed into the city, leaving Cook Strait’s choppy water behind us. 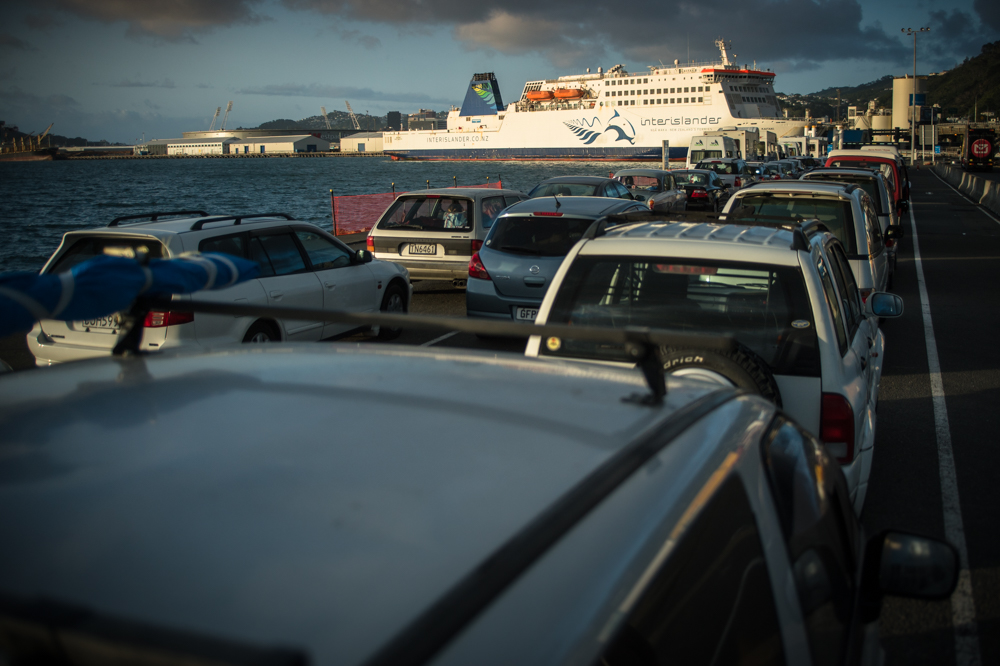 Moonbeam Bettina waiting to board the Ferry in Wellington

From inside Wellington Harbor, tall hills block the view of the ocean, and the harbor waters can be calm regardless of what the sea is like. So when we boarded our ferry the next morning, it looked like the forecast for calm waters could be accurate—the harbor was as still as a pond. Leaving the dock behind, our boat rocked gently side-to-side like a cradle and we relaxed in the atrium with two espressos and a view of our van below on the deck.

The scene could best be described as idyllic, but the first onboard announcements pretty much destroyed that illusion. The captain announced that the seas were heaving outside the harbor and the swell was up to six meters. All passengers were requested to stay in their seats, and crew would come around with ice chips to help with seasickness. It looked like my thrill-seeker heart was going to get its way.

As we passed between the cliffs that hem in the harbor entrance, the boat began to tip up and then down, gently at first, but then each wave seemed to grow. Gradually, the people milling about in the atrium found seats and stayed put and before long, crew arrived with sick bags. That’s when I started to get a little concerned; I don’t get seasick but I can’t stand it when people are getting sick around me. But Ben reassured me that he was feeling fine, and amazingly, there were people on the outer deck taking photos despite the fact that every few seconds they had to hold on for dear life.

Every few minutes there was a wave that was bigger than the rest. The boat would tip up, and at the back, we’d be looking straight down through the atrium windows at the heaving waves below us. It seemed unreal that the cars on the deck didn’t roll or tip, but they held their ground. Then we’d crest the wave and crash down into the bottom of the swell with a loud “boom”, the whole ship shaking and a huge spray surrounding us–just like in the video. This went on for a half hour before a woman seated near me asked a crew member if it was almost over.

“Oh no, we haven’t even reached The Rip yet. It’s only going to get worse.”

I’ll admit to a little thrill upon hearing those words. The woman to whom they were addressed looked a little less excited.

Apparently in Cook Strait, opposing ocean currents, a riptide and particularly strong wind gusts all combine in one small area called the Karori Rip. It can bring big ships, including the ferries, to a complete standstill as they try to fight the elements. Fortunately for the people around us, clutching sick bags and sucking ice chips, the Rip was feeling generous and we seemed to cross it without incident. In fact, the waves were getting smaller and the ship was plowing toward Queen Charlotte Sound, now within reach. The captain promised smooth sailing from that point on. 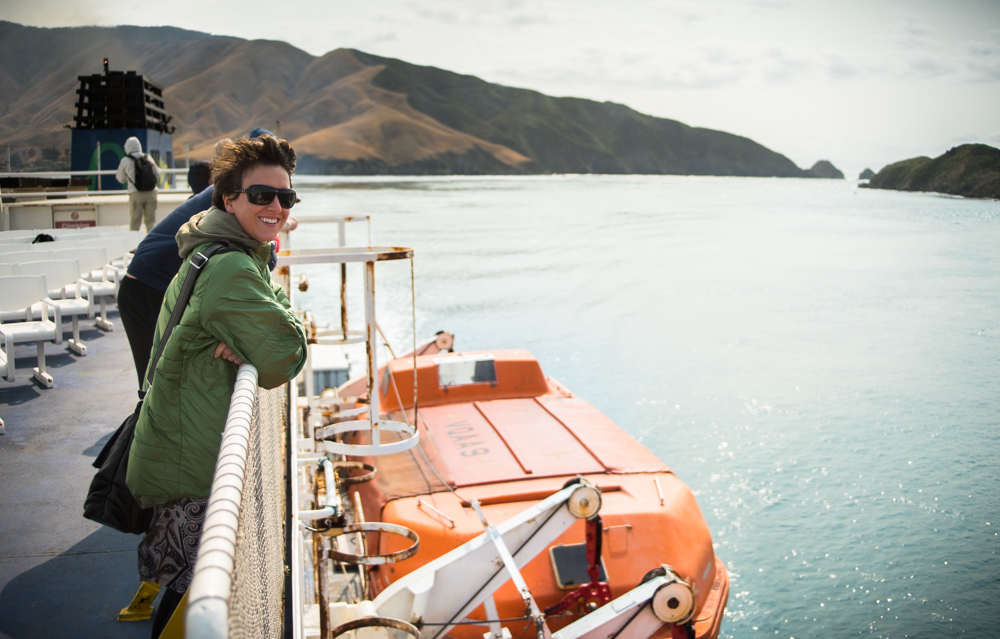 Jenna enjoying Queen Charlotte Sound. The gap on the right in the background is the entrance from the Strait

We spent the rest of the trip up on the observation deck and were treated to a beautiful introduction to the South Island. Clear, calm blue water stretched out in front of us, and pine-clad hills rose on either side of the sound. A stiff breeze whipped our jackets and made my eyes water, but other than that, it felt like we had left the Roaring Forties far behind as we pulled into Picton, our first stop on the South Island. 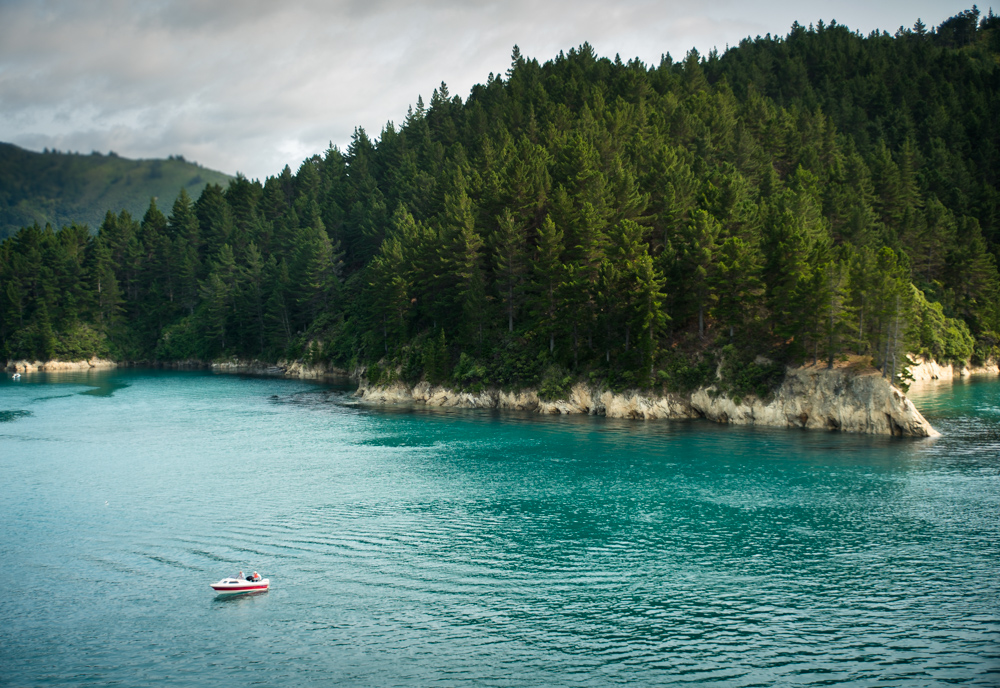 Our ferry crossing could have been much worse. It’s not uncommon for the three-hour trip to stretch into ten hours spent battling wind, cross currents, and swells above ten meters. All told, I think we got a little taste of adventure without any true drama, which is just the way I like it.