How to see the Northern Lights in Iceland

First things first: there is no guarantee you’ll see the Northern Lights on your trip to Iceland, no matter how much planning you do. So make sure you’re okay with missing them entirely before you plunk down the cash on a “Northern Lights Tour” or even the trip in general. There is so much to see in Iceland that you shouldn’t be disappointed, no matter what, but don’t let the success of your trip hinge on something as unpredictable as the aurora borealis.

Alright, now that the disclaimer’s out of the way:

For the best chance at a Northern Lights sighting, go to Iceland in the fall, spring, or winter.

Nighttime hours are scarce during the Icelandic summer and in mid-June, it doesn’t get completely dark at all. Needless to say, those aren’t ideal viewing circumstances for the Northern Lights. The weather is more unpredictable September-April, but at least you’re guaranteed ten-plus hours of total darkness–which is what you need to see the Northern Lights. That being said, Ben’s family saw the Northern Lights in mid-August (in our paradise of Seyðisfjörður at that!), so there is a chance you can have the best of both worlds.

Check the weather every night of your trip

There’s no sense in waking up throughout the night if it will be cloudy every time you do. Download a weather app and take a look at the hourly forecast.

Uh, not ideal. Courtesy of weather.com

Speaking of forecasts and apps, download the Aurora Forecast app. You can spend hours on this thing, learning about the Northern Lights. Even if you’re not a huge nerd like me, it’s pretty interesting to see where the most intense “Space Weather” is taking place on any given evening. Anytime the forecast says “Moderate” or “Active,” get your butt outside. You can also set up push notifications if you’re worried about missing it. 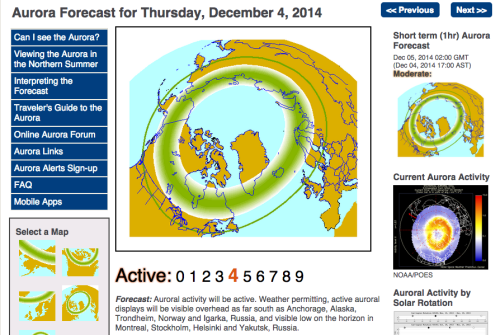 Sample aurora forecast from the University of Alaska Fairbanks (this looked like a good night for Iceland!)

This is another fascinating resource. Choose the map that is centered on Greenland, and you can get forecasts for the next hour or next night. It’s good to keep an eye on the hourly forecasts since the aurora are so sporadic and episodes only last about thirty minutes.

Get out of town!

While Iceland’s towns and cities are tiny compared to most other countries, getting out into the country a bit can still help to see the auroras as bright as possible. Especially if you are in Reykjavik, get out from under the light pollution that towns produce to get the best show. This is one of the reasons why Northern Lights tours are usually cruises. It gives you the best chance of the brightest auroras being out on the water. Another option is to stay in a place outside of town or in a smaller town than you would typically visit. We loved this place in Hauganes, a small fishing village down the fjord towards the sea near Akureyri. The place itself was delightfully Icelandic and walking 25 feet from the front door gave us our first look of the Northern Lights over the fjord; it doesn’t get much easier than that! 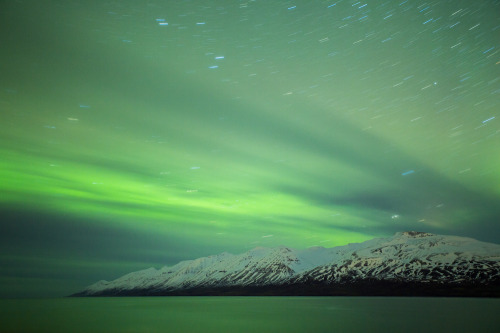 Northern lights over a fjord! Doesn’t get much more Icelandic than that!

Bundle up, go outside, and look up!

If the forecast is “moderate” or “active,” that’s when you should head outside. Keep your eyes peeled and look throughout the entire sky–the lights may not be directly overhead. Also, they can be very faint. You won’t always see the neon green displays that comes across in photos–camera settings can make the aurora appear much brighter than they actually were–but you might get lucky and see an especially bright curtain of green, or even red, light dance across the sky.

We saw the Northern Lights on two consecutive nights during our eight-day trip to Iceland, and that was it. If you make the trip and miss them completely, don’t worry–you’ve got an excuse to go back to one of our favorite countries on earth!