Our first few days in Morocco 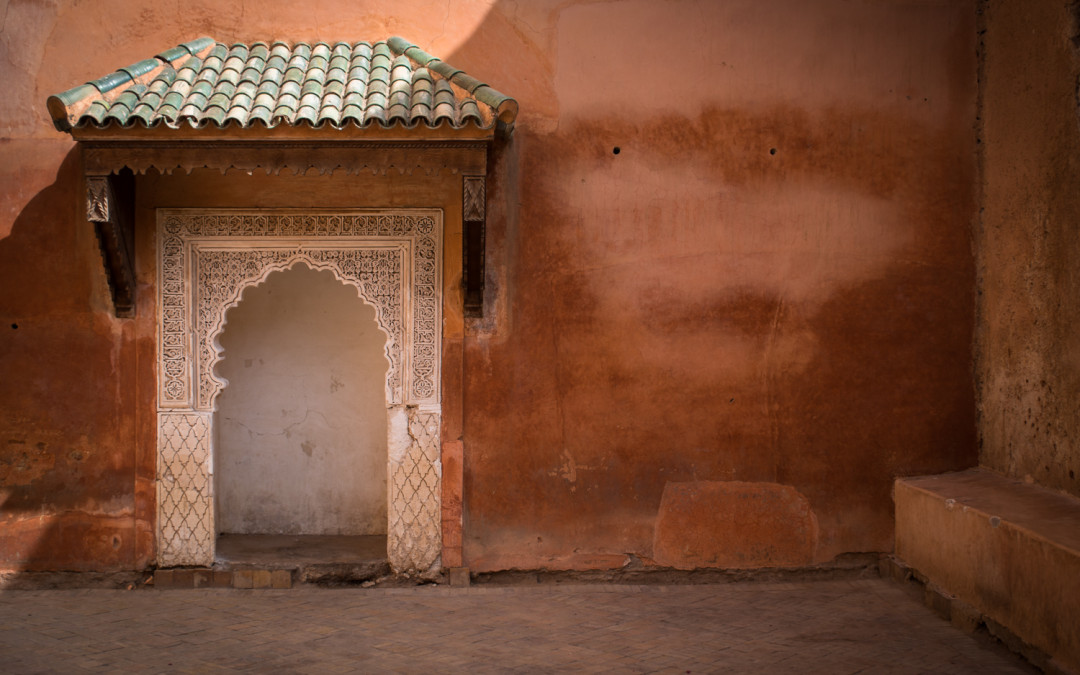 All aboard the struggle bus, first stop Casablanca.

Five months into our round-the-world adventure, Ben and I still consider ourselves newbie travelers, albeit newbies who have a pretty good grip on how to get around. All throughout Thailand, Cambodia and Vietnam, we were happy with the food we ate and happy with the places we stayed, all while managing to stay under a pretty strict daily budget. Well, we’re not in Southeast Asia anymore, folks. Morocco is a whole different animal.

I’m sure by the end of this trip I’ll have fallen in love with Morocco, but it hasn’t happened yet. Of course, we’ve only been here for three days, and have only seen Casablanca and Marrakech so far.

We arrived during a heat wave

While preparing for this trip, I was delighted to read that seasonal averages for May in Marrakech range from a low of 59° Fahrenheit to a high of 85°. Yesterday hit 115°; right now, at 6 p.m. it’s almost 100°. Sightseeing in this kind of heat feels nearly impossible, so we’ve been trying to hit all the sights before noon, then hang out in a cafe for a couple hours. Sadly, the rest of the daylight hours have been spent in our hotel rooms. Normally we’d camp in a cafe for the entire afternoon (we did that in Vietnam when these kind of temperatures were combined with 100% humidity), but none of the cafes we’ve visited so far have air conditioning, or even a fan. Our hotel rooms have air conditioning and that’s hard to argue with when the Sahara sun is beating down on you.

I picked up bedbugs on our first night 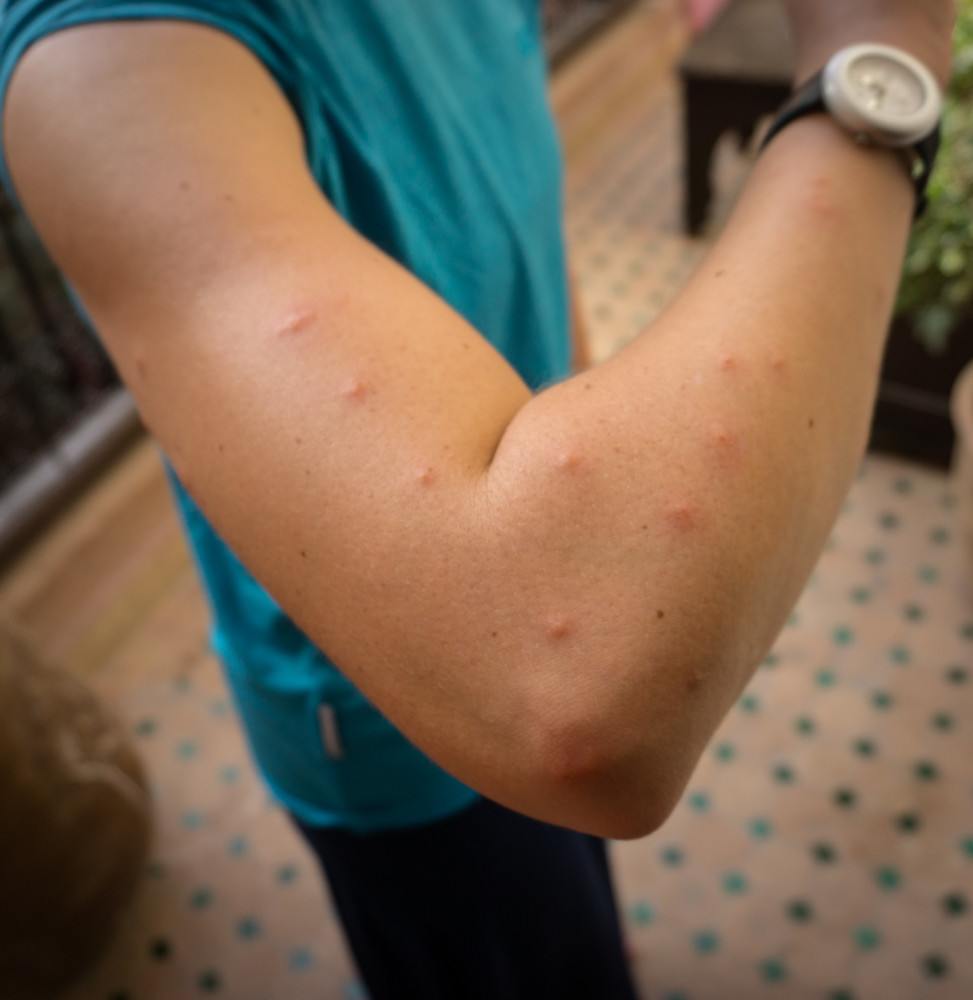 Merely a single side of a single arm’s worth of bites.

The twin bed I tumbled into on Tuesday night in Casablanca felt like the most comfortable place in the world, after traveling for well over 24 hours to get there. It turns out the bed’s previous inhabitants weren’t as happy to see me. The next morning, I woke up with a few really itchy bug bites, but I blamed them on the mosquitoes that had been flying around our room. But on Thursday, I woke up with 27 bug bites on my arms alone, and a few more on my legs and back. They didn’t feel like mosquito bites, and they were in clusters, which is a telltale sign of bedbugs. We had a train to catch, so I threw my clothes in my backpack and we hit the road.

Today I woke up realizing that I had probably brought the bugs with me, and it was time to deal with the problem. Heat treatment is the most effective way to kill bugs, and luckily we’ve got a heat wave on our side. I used my almost-nonexistent French skills to buy two black trash bags (“Je voudrais deux sacs noir” would have sounded great, but in the moment here’s what I came up with: I pointed at a couple small plastic bags and said, “Noir? Grand? Deux?” and luckily the very patient shopkeeper caught on). Every fabric thing I currently own went in the bags. I took a very hot shower, and the bags went up on the roof to bake in the sun. They’re still up there.

We have been beyond lucky to travel for this long without getting truly sick, and our luck continues for the most part. But Ben’s stomach is feeling unsettled enough that he’s not having a very good time, nor enjoying the food nearly as much as he’d like. It’s hard to keep your body in perfect health when you combine jet lag, extreme heat, unfamiliar food, and foreign bacteria. Hopefully the discomfort will pass soon; in the meantime he’s sticking to the blandest food he can find.

But it’s not all bad!

Ben’s sister Kristin was supposed to join us on our trip to Nepal, and she wasn’t about to give up on three weeks of vacation. She has joined us in Morocco and it’s really nice to have some family around. Ben and I really love each other, but it’s good to add another person to the mix every once in awhile. It keeps conversation fresh 🙂 Plus, at this point she has neither bedbugs nor nausea so she’s making us look like complete amateurs. 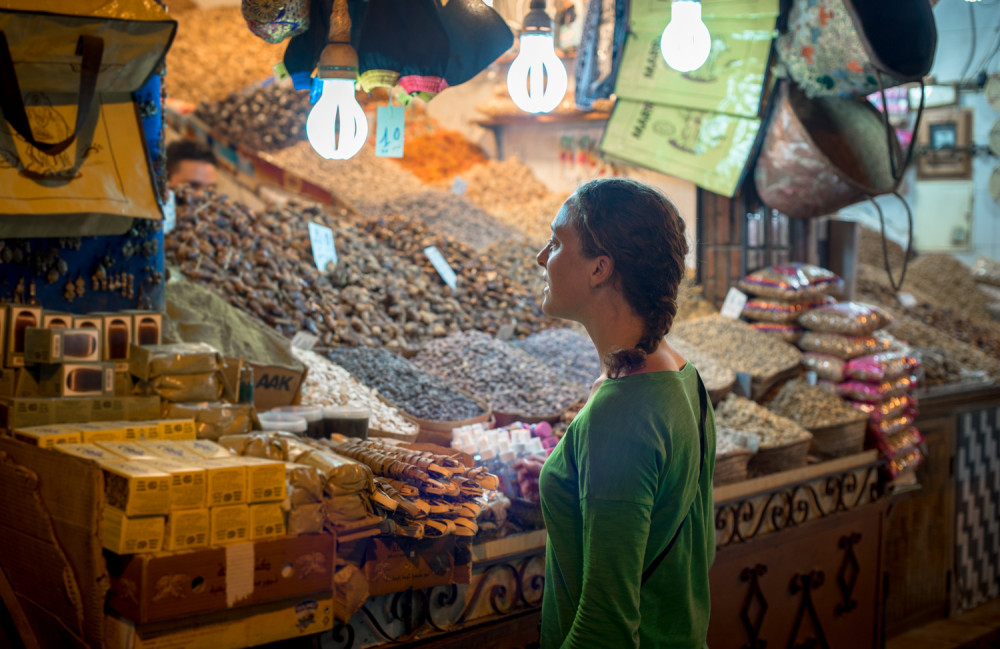 Kristin buying dried apricots in one of the many souks of Marrakech.

Morocco is culturally unlike anything I’ve seen yet. It’s hard to get too wrapped up in our troubles when we have ancient Saadi tombs, ruined palaces, and the world’s craziest public square to explore. Here are the highlights of the last three days: 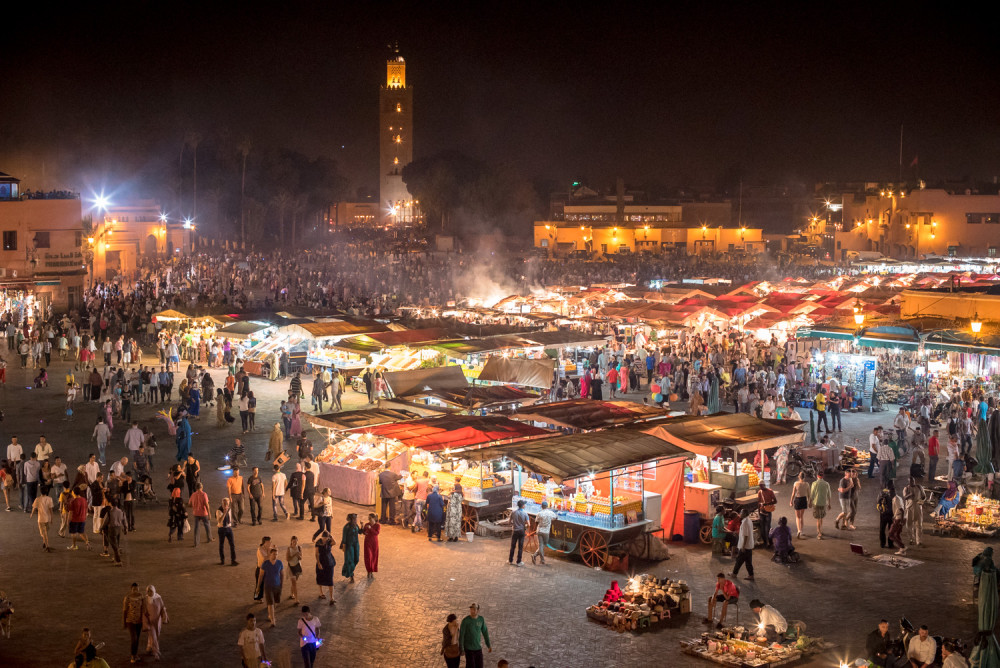 Djemaâ el Fna explodes with people at night when the temperature has finally become more tolerable.

Or, the Gathering Place of the Dead. This public square in Marrakech hosted executions in the 11th century and today plays home to storytellers, snake charmers, potion merchants, dancers, musicians, and food, much like it has for the last thousand years. I told Ben tonight that it might be the most atmospheric and exotic place I’ve ever been. I will need to write an entire post about it, just to capture a tiny fraction of the experience. 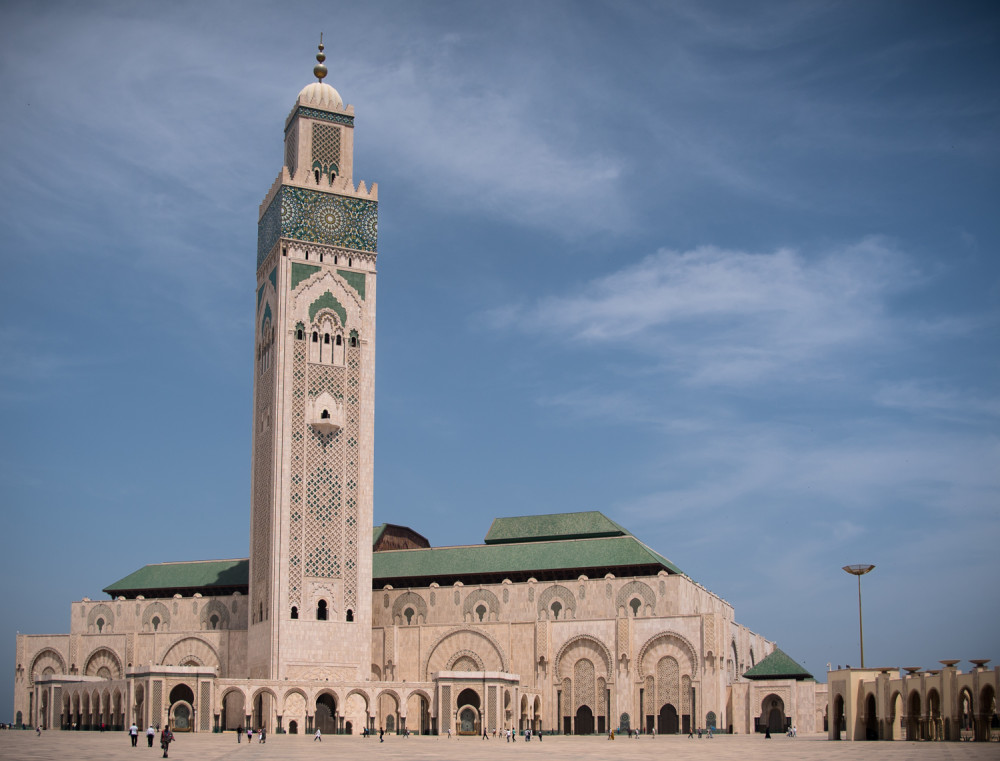 The tallest minaret in the world and the third largest mosque overall are perched on the Atlantic Coast in Casablanca. As we approached, Kristin said, “It really doesn’t look that big.” Then we realized that we still had a fair distance to get there. Once you’re up close, the scale is unbelievable. The inside can hold 25,000 worshippers and the roof retracts to let in the beautiful Casablanca sunlight.

The Souks of Marrakech

I like to think my bartering skills have improved after a few nights wandering the markets of Thailand, Cambodia, and Vietnam. Tonight I was thrilled to bargain down a leather purse from $65 to $35. The souks here in Marrakech are an assault on the nose, ears and most of all, eyes. Getting lost in their twisting alleys is a visual overload.

Tomorrow we head into the Atlas Mountains for a reprieve from the heat, plus a hike up the tallest mountain in northern Africa, Jebel Toubkal. From there, it’s into the Sahara Desert. We have a lot to look forward to, and I’m hoping we can leave the stresses of the last few days behind us–especially the bedbugs.