I am the Paddleboarder 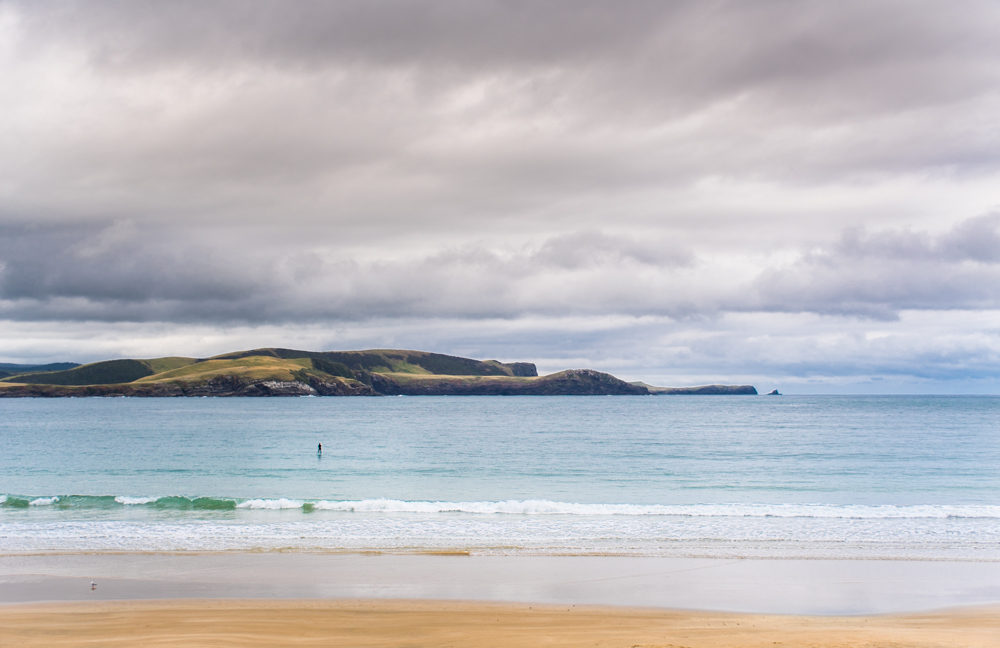 Near every time I arrive at some secluded cove or beachside town and look out, I am immediately drawn to those playing in the water. Not true; first, I am enamored by the spectacular color of the water. Again. I do this everytime. I see actual, blue ocean water and I freak out like it’s something that only happens once in a lifetime. In New Zealand, driving on the coast, it happens once a day, if not once an hour.

After I get over the fact that water is, in fact, blue, I’m usually pulled to the people out playing in said water. I can’t emphasize the number of times I’ve seen surfers, kayakers, and my personal envy, paddleboarders playing in a bay or amongst the low rising swells. I can’t surf and learning I feel would take consistency, something a single 90-minute lesson scattered here or there wouldn’t satisfy. Kayaking is easy enough to do, but only to a low ceiling before you can get way over your head (literally, water will rush over your head if you get into too big of waves; that shit is not safe). Otherwise, it remains pretty pedestrian. Fun, but pedestrian.

Which is why I’ve been drawn to stand up paddleboarding. Sure, it is pedestrian as well when the water is calm, but there is enough of a challenge in the workout of balancing and paddling alone that, even on the calmest stretches of water, I at least feel accomplished in some small way. So, every time I saw the lucky ones out on their boards, long paddles dipping and whirl-pooling the water as they go, I couldn’t help sigh and say, “Man it’d be awesome to SUP here.” 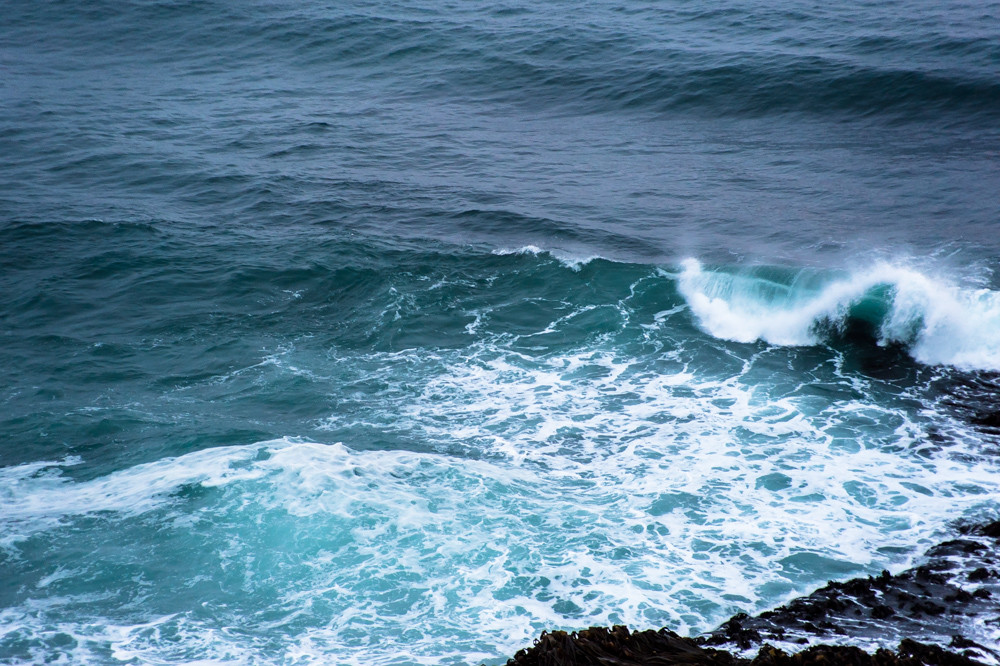 The water in Porpoise Bay in the evening.

Until Porpoise Bay. Porpoise Bay in the Catlins region of New Zealand’s South Island’s South Coast is a perfect cove on the bottom of what is seeming like a perfect country. The dynamite swells that fill the semi-circle beach would be enough to draw surfers and tourists to come and play, but what really reels people in to this bay is how it lives up to its namesake. A pod of the world’s smallest dolphins, Hector Dolphins, live their entire lives exclusively in this pretty patch of water. Comfortable with people, these little guys simply circle around and around the bay, day after day eating their fill and showing off. The trick is, being at the bottom of an Island in the increasingly South Pacific, the water trends more toward Antarctic temperatures than Hawaiian. Swimming with the friendly water mammals could also lead to a bit of hyopthermia (not that people don’t try. They just don’t seem to last very long).

Enter Nick’s Surf School, Catlin’s Surf. The surf lessons and school alone is apparently renowned. Jenna and I were content to take a surf lesson just to get in the water with the dolphins, fully wet-suited. Learning from the best was just going to be a bonus. But then, we realized Nick rented out SUP boards as well.

We jumped at the chance. Neither of us had paddleboarded on the ocean, only lakes and rivers. It seemed like as good a time as any to try out something new and challenge ourselves (without the wipeouts of trying surfing). Plus, dolphins. We put on our wetsuits (another first for both of us) and rushed out into the bay. The little porpoises were apparently around, but not making themselves known. After about fifteen minutes of paddling around getting used to SUPing with waves (quite the balance challenge) and a couple sea lion sightings, we finally saw the tiny dorsal fins pop out of the water about 50 yards away. We paddled around, circuitously, making sure we never directly engaged the dolphins. As a matter of respect, you aren’t suppose to rush to the dolphins directly. Instead, you allow them to see that you are hanging out in their neighborhood and see if they want to hang out on their own terms. Of course, most people on the beach ignored these manners and immediately strip down to their swimsuits and dove right in the path of the pod. Those who were less adventurous or more courteous were taking pictures on the beach. And that’s when it hit me.

I am the paddleboarder!

Finally, I was the one out in the water, zipping (ok, slowly zipping) around in a giant, essentially private water park. Now, instead of taking photos with the anonymous paddleboarder in the distance, I was going to be the one showing up in all THEIR pictures. They’ll look back at their photos of the dolphins swimming about the waves and in the background, there I’ll be. I’ll be a small dot on the horizon beyond the smaller dorsal fins. They’ll realize I’m there and say, “Man, it would have been awesome to SUP there.” 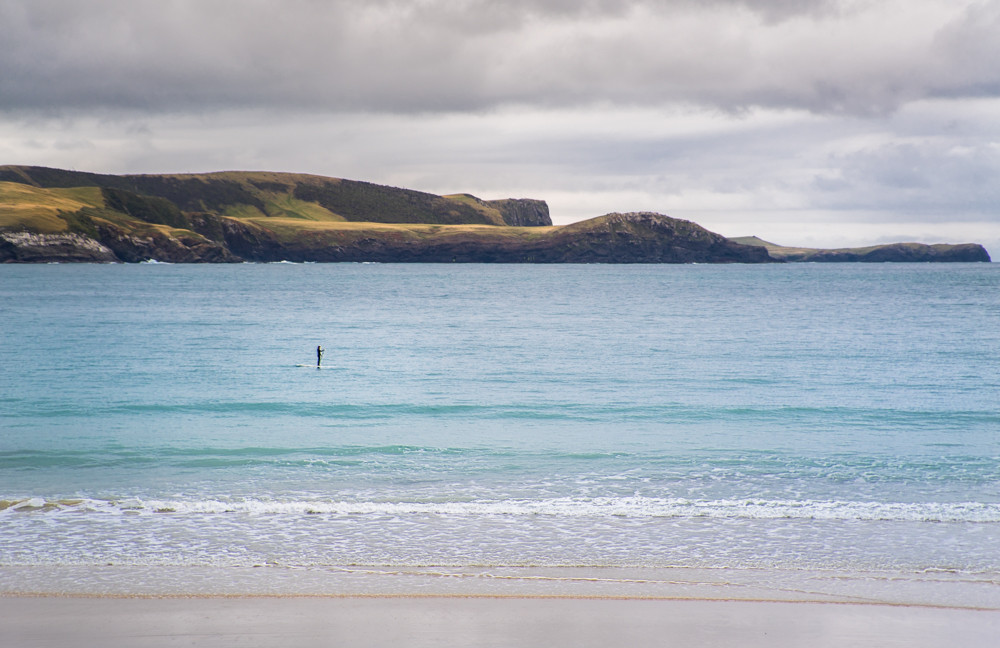 Having this realization while in the water was huge. Immediately, I began taking everything in as much as I could. I continued to freak out about the aquamarine beauty of the bay water. I laughed watching the dolphins get pulled into a swell; randomly seeing their tiny bodies roll over with the wave. At first, Jenna pointed out that SUPing with waves was not nearly as relaxing as it was on a calm lake. But soon, both of us eventually fell into the rhythm of the tide. Balancing and paddling became second nature and the consistent sway of the ocean put us in a near meditative state. It was the most present I’ve been in a long time.

It’s helped remind me that for pretty much everyone else I know back home, I have been the paddleboarder of their lives. Traveling abroad while those I’m closest are living their “normal” lives is a strange reality to live in. Too often, I’ve found myself taking for granted this adventure. I think it’s easy to overlook what makes your life unique as soon as it feel normal. During the difficulties of getting used to a new lifestyle or learning a new skill, of course it seems special. A lot of times, that’s what makes it worthwhile. Once you move beyond the struggle to normal, it becomes all too easy to forget how far you’ve come since everything felt new. 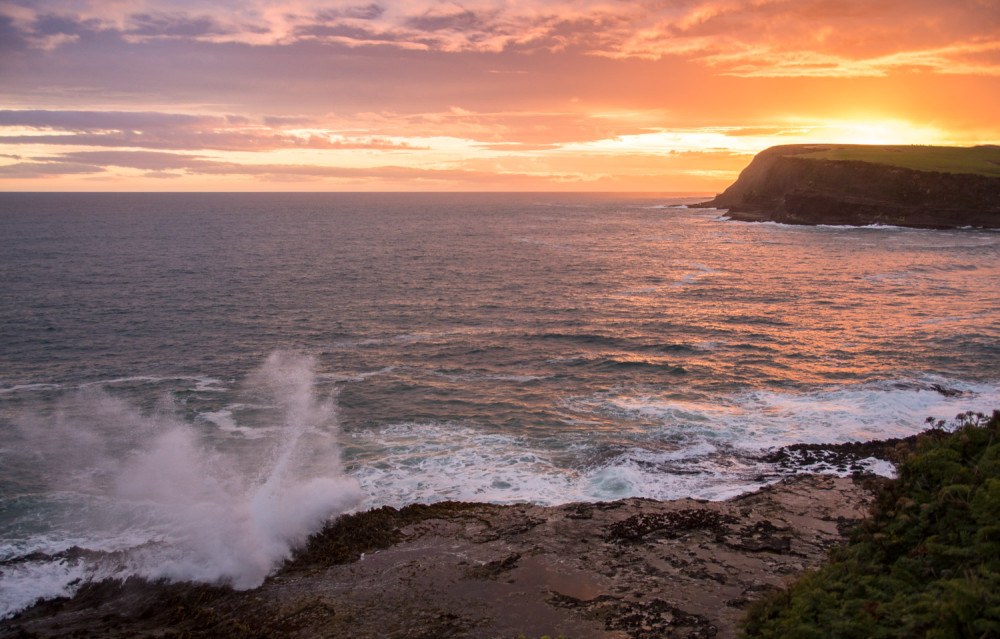 As if the day wasn’t great enough, this was the closing sunset we got.

After getting our fill of paddling around the bay, we headed back to Nick’s to strip off our neoprene skin. We both couldn’t hold in our excitement as we cautiously and loudly heading into the bluffs, a strange but necessary combination to not sneak up on any napping sea lions. We probably said the word awesome about ten times each referring to our newest experience.

Our favorite campground in New Zealand: Gentle Annie's
Karamea: A little too far off the beaten path