Back in time in the Douro Valley 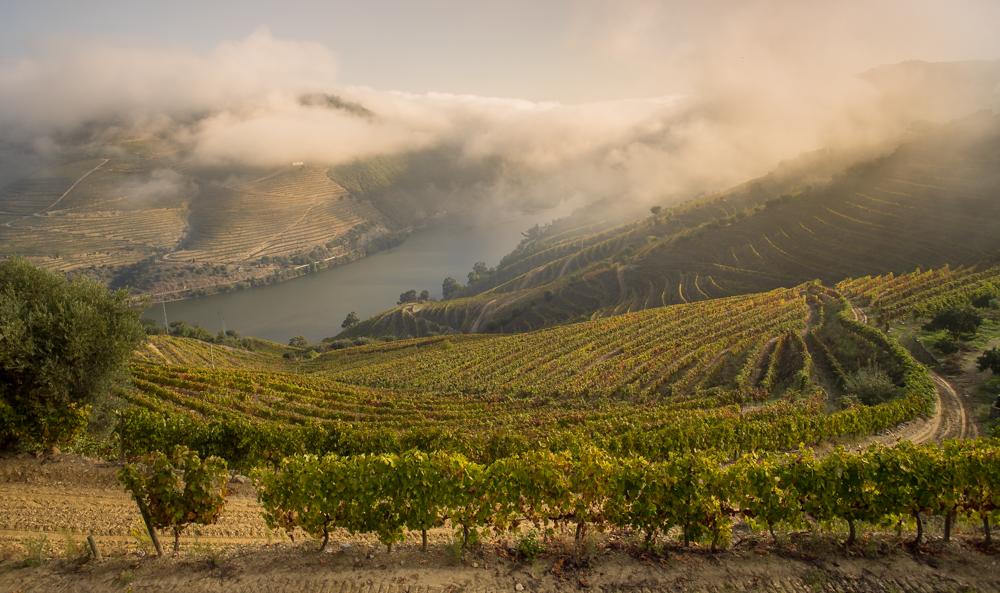 As the narrow road winds tightly downhill and we draw further and further from the main motorway, I begin to see glimpses of sparkling water ahead. We pass one stately gate after another, every other one leading to a vineyard or wine estate. We’ve arrived in the Douro River Valley, whose terraced hillsides have played home to grapevines for over 2,000 years.

I’m sure much has changed here in those two millennia, but some things haven’t. The wild beauty of the undulating hills is only somewhat tempered by the presence of huge quintas (vineyards), where the orderly rows of vines seem to curve around hillsides all the way to the horizon. While the big brand names of port (Taylor’s, Sandeman) that we became familiar with in Porto proudly lay claim to their quintas with garish billboards, smaller, family-run estates are everywhere. Unpredictable opening hours and generous tastings give the afternoons a languid feeling, like time might have a different, slower meaning here, as cliche as it sounds. 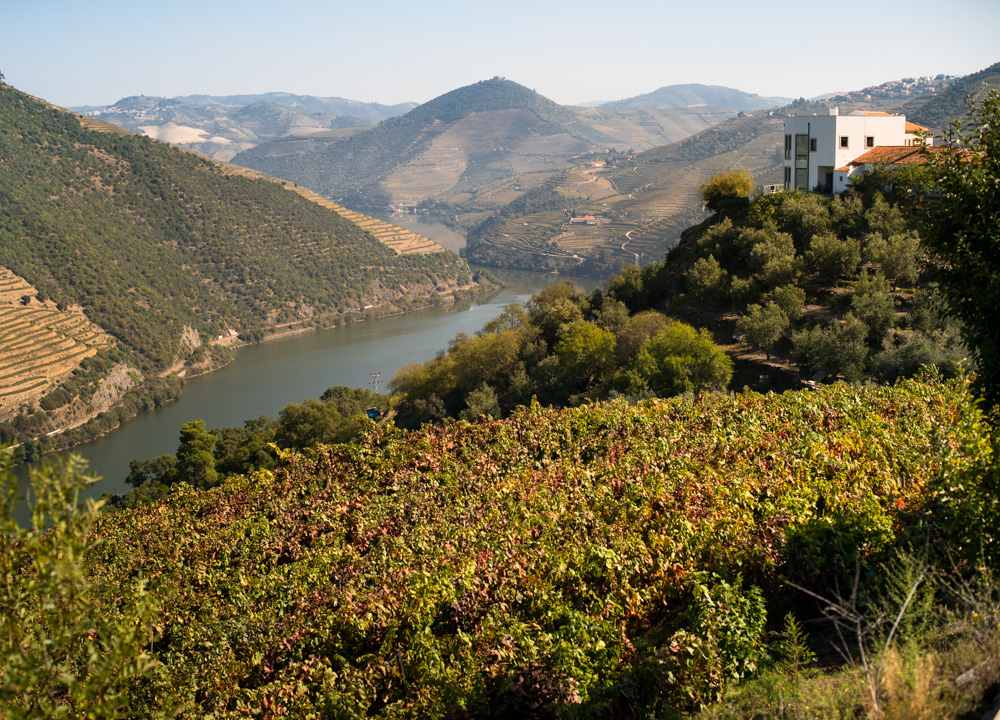 Our home in the Douro for two days is Quinta de Santo António. Perched high on a hillside, reached only by a twisting cobblestone lane, it feels very, very far from modernity, but the main building and hotel are surprisingly, pleasantly contemporary. Walls of glass make the most of views that stretch for miles both down- and up-river. Our host, Carlos, inherited the property from his parents and sells his grapes to Taylor’s, so there is every possibility that the port we tasted in Porto came from grapes grown on this very hill. We arrive at the height of the grape harvest, so truckloads of men and women arrive early in the morning to pick; in the afternoon the trucks are loaded down with crates full of the purple grapes. Everywhere we go in the Douro, we are trailing the trucks, every one of them packed to the gills with grapes.

We hike among the vines many times during our short visit, down to the neighboring wine estate for a tasting (they were closed), and up to where the harvesters are moving along the rows with their baskets. They don’t speak much English (or any), and our Portuguese is limited to the only phrase Ben needs: “Posso tirar uma foto?” May I take a picture? We exchange smiles and Ben snaps away. 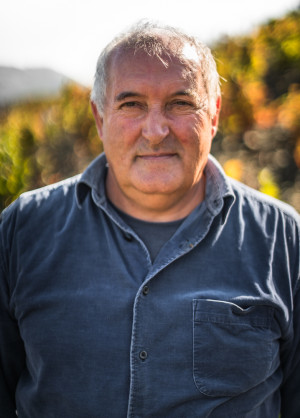 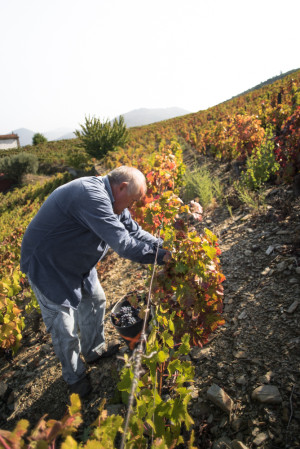 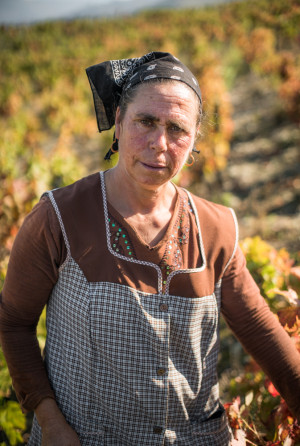 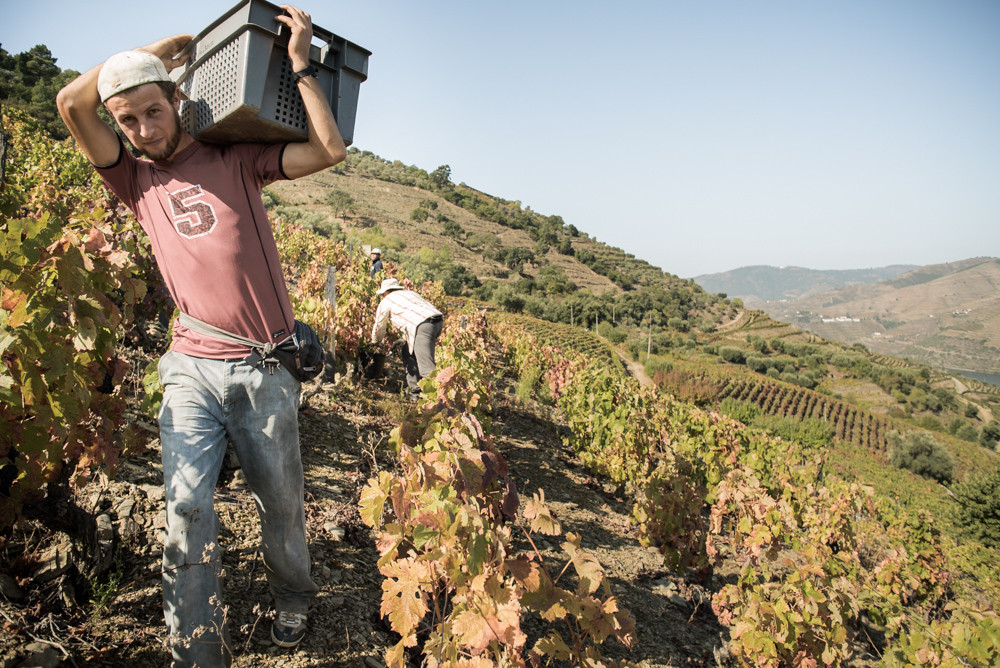 One afternoon, we pay for a “cruise” up the river. It includes a small glass of port, and that’s about the only entertainment we get for the several hours we’re on board. The sun glints off the water, the hillsides glide by with their endless terraced vines, and eventually we turn around and see it all again. Our captain seems to speak only Portuguese, and the man who I assume is the first mate speaks Portuguese and French, so Ben and I speak mostly to each other, or not at all. Not exactly a high-energy excursion, but then, why do anything but kick back, when the October sun is so relaxing? 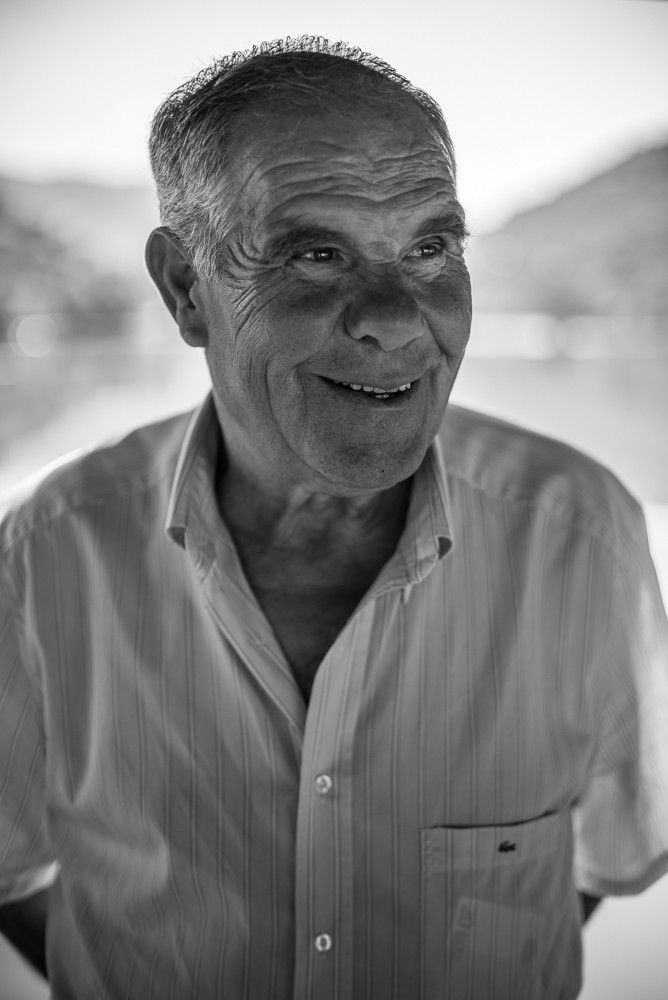 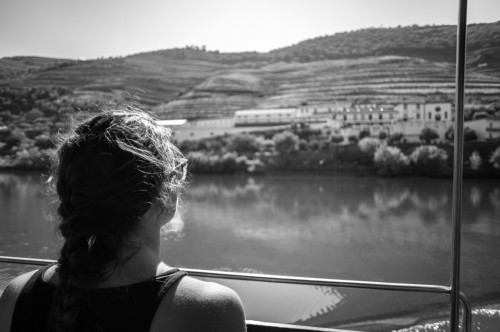 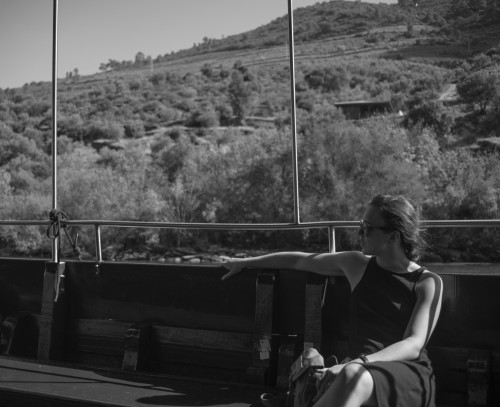 At night, we wait until after dark to go to dinner, after eight o’clock, and we are still some of the first patrons there. We’ve tired of port and we order a rosé from another region of Portugal. After all the syrupy sweetness we’ve been drinking, the rosé seems impossibly refreshing. The next night there is a big futbol match on, so the restaurant is busier. We have a wonderful red wine that comes from the vineyard bordering Quinta de Santo Antonio. I don’t remember the food, mainly because almost every meal we ate in Portugal seemed the same–big portions of red meat and a huge helping of potatoes (there were two wonderful dinners at modern restaurants, those stand out; they were very expensive). 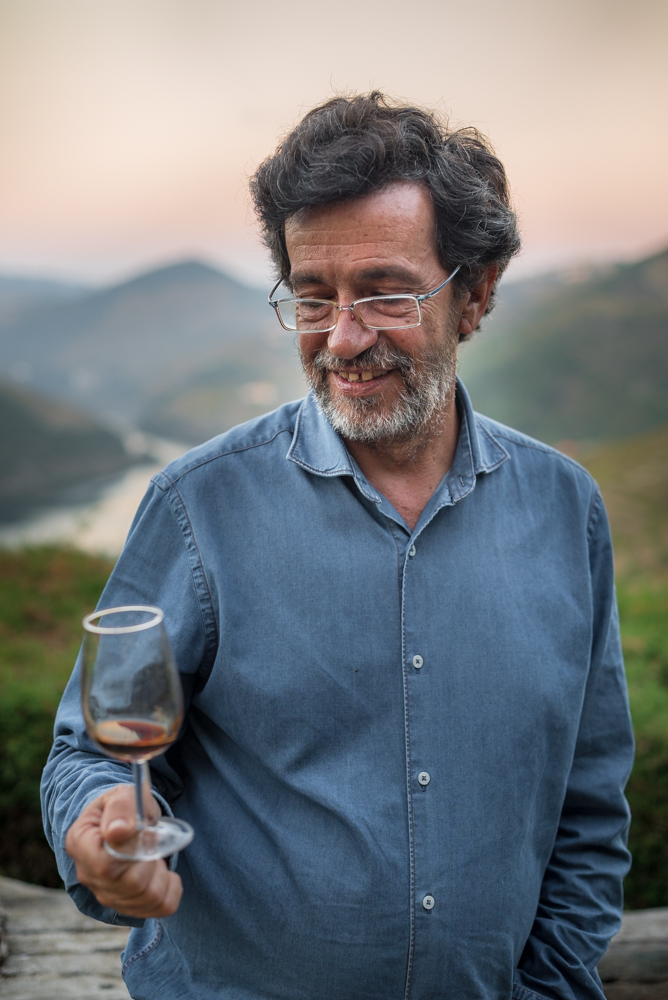 That night, Carlos invites us to experience a true treasure–he wants us to taste a port that’s been in his family for decades and is actually even older than that. The small barrel was given to them as a gift and Carlos tells us that it is well over a hundred years old, although no one knows its true age exactly. First we try a glass of the port that has been aging here for forty years; it is better than anything I have ever had to drink, like a fruity, liquid caramel. Then we try the hundred-plus-year old port; as the only lady present, I am given the first sip, which feels like a huge responsibility. How should I react? What if I hate it? There is no danger of that, though; I’m blown away when I finally muster the courage to try it. This port is like nothing I’ve ever tasted, sweet but complex, it doesn’t take an expert palate to know that this is really special. I finally understand that I do actually like port–but only vintage, of course. Only the port that costs several hundred dollars a bottle.

On our third morning in the Douro, the time has come to say goodbye. One last time, we snuggle the kittens I’ve tried to befriend, who are too young to be curious or playful, but are so adorable I can hardly stand to put them down. We say goodbye to Carlos, our gregarious host, and admire the rugged hills brought to order by their carefully tended vines. We drive away along another curving highway and time speeds up again.