Our future: One big mystery, plus a road trip! 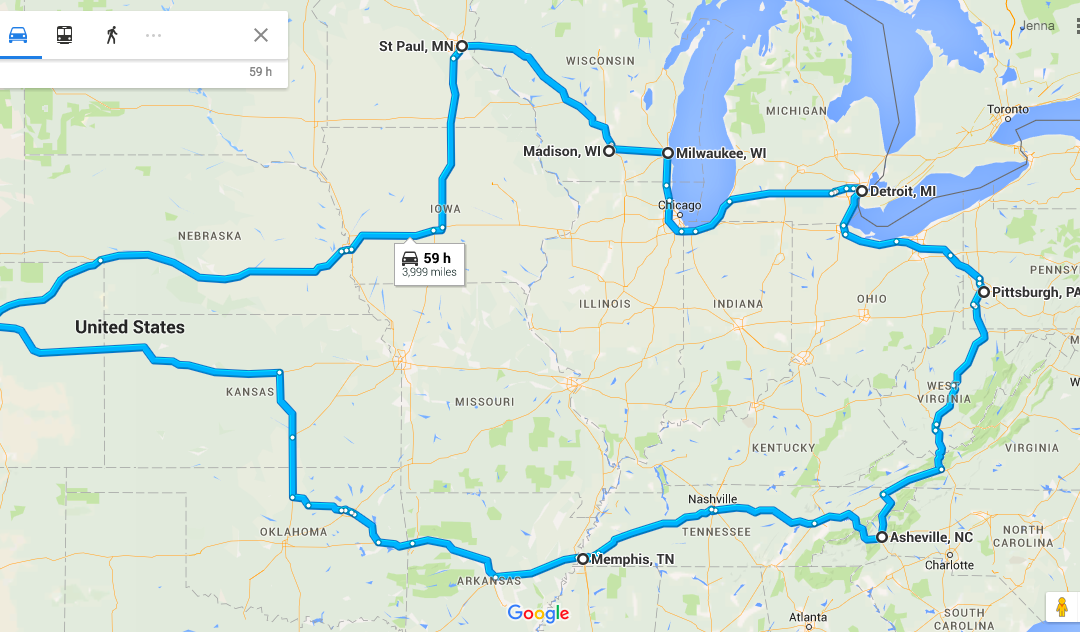 In two weeks, we’ll be back in the United States. Frankly, the idea of going home is more than a little terrifying to me, so to soften the blow, I’ve begun planning a road trip. Through the American Midwest. In the dead of winter.

Yes, it sounds like insanity. But there is a reason behind it.

Our future is one big question mark. We’ll spend most of October in Michigan, where Ben’s extended family lives. I’ve only been to Michigan once, and I’ve heard it’s beautiful in the fall, and I’m overdue for a visit to the Thomas “ancestral home.” We’d also like to spend some time this fall in Colorado, but beyond that, we have no idea where to settle down. The Colorado housing market has gone absolutely insane, putting the areas we like completely out of our budget (we have been unemployed and draining our savings for the last nine months–on purpose, but still). Plus, we’ve been all over the world this year; maybe we should branch out a little and live somewhere other than the state we’ve both called home our entire lives. But…where?

As previously mentioned, we’re unemployed and cash-poor, so the cities that draw most people our age (Portland, Seattle, New York, San Francisco, Chicago) are a financial stretch for us. Same for most of the East and West Coasts. So we’re looking at a handful of cities in the middle; a bunch of places that we’ve never been, that may not be traditionally appealing to people in their mid-twenties, but have been experiencing something of a renaissance lately. Saint Paul, Minnesota. Milwaukee, Wisconsin. Detroit, Michigan (there are so many articles about Millennials in Detroit that there’s a backlash). Pittsburgh, Pennsylvania. And the dark horse from the South: Memphis, Tennessee.

Ben visited Memphis once. I’ve been to Detroit once. So our personal experience with these cities is basically nonexistent. That’s why I dreamt up this Midwest Road Trip you can see in the map up top–so we can get a feel for these places and see whether we like them or not. I’m not sure if we’ll actually do it; it depends on so many things: how much money will we have left when we get back to the States? how much of that will we spend on a car? how expensive is gas? is it going to be a hard winter for driving? and the big one: what about the job search? I’ve already started applying for jobs and Ben will be right behind me. If one of us gets a plum job right off the bat (which is unlikely), we’d be pretty dumb to turn it down just because it isn’t in one of the cities on our list.

If the stars align and we have enough money for a long trip, we’d probably set out from Colorado to Saint Paul in mid-December so that we could spend Christmas in Michigan with Ben’s family. And then we’d continue to Pennsylvania and Tennessee, with a detour through North Carolina to visit some of my family, in January. At a time when our future is entirely up in the air, it helps me to have something, even a hypothetical dream trip/bout of insanity, to look forward to. There are a lot of exciting things happening in the cities of the Midwest. We’d love to be a part of it.

Planning our 2015 journey around the world, I always knew we’d be at loose ends at the end of the year, and I’m not worried about it–at least not yet. We’ll figure it out one step at a time, and if I’ve learned anything during the last nine months of travel, it’s that we’ll roll with the punches as they come.

Have any suggestions for us? Know of any great bars in the cities on our list–or is there a city you think we should add? Let us know in the comments!

Budapest: What's not to like?
One Minute through Copenhagen