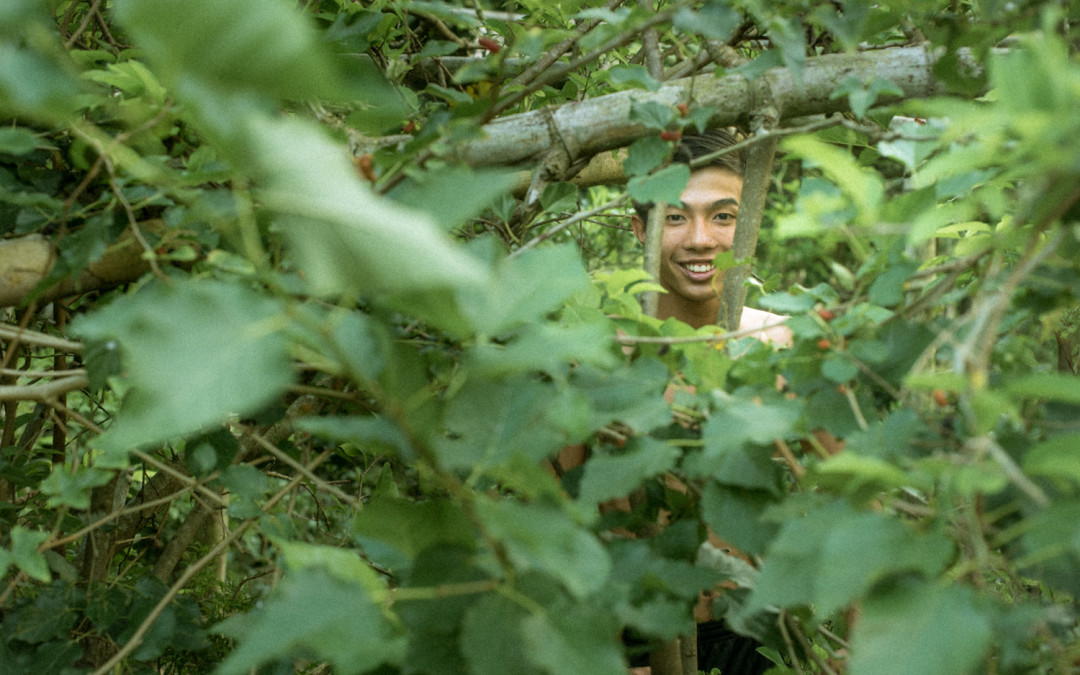 This photograph is the most incredible picture I have ever taken, and it has nothing to do with the quality of the photograph itself. Objectively, it’s solid. It is not the greatest. It was taken with nice enough light. I like the selective focus, especially amongst the chaos of the plants. But none of that is important. The important thing is the young man in the image and the young man behind the camera.

Because he is Vietnamese. And I am American. And 40 years ago, a meeting between the two of us, separated by a few bushes in central Vietnam, would have ended in tragedy, not a snapshot.

Learning the History of the Vietnam War From a New Perspective

Traveling around Vietnam, it is impossible to avoid acknowledging the Civil War that plagued the country until 1975. At this point, I think it is pretty well understood that the U.S.A.’s involvement was a bad idea. It’s an insanely complicated issue, but I think that opinion has been validated. While in Hanoi, we of course did our visit to the Hanoi Hilton, the POW prison that housed John McCain and numerous other POWs. In Hue, we felt the echoes of anti-Western sentiment. Nothing over the top or dangerous, simply a feeling of unwelcome in parts of the city; one that is supposedly still haunted by ghosts of the war (the DMZ is outside of town, with tours traveling there daily). In Saigon, our final stop in the country, we went to the War Remnants Museum, a necessary stop to gather a better understanding of the war and its effect on the country. Coincidentally, The Atlantic published an article detailing the “American War” from the perspective of the victorious North Vietnamese during our first week in the country. All of these factors were crucial to understand what had happened then. What is interesting to me, is how things have changed in the last 40 years.

Figuring Out Our Place in the World

There are a lot of bad things going on in the world right now. Following the headlines from the news back home is a lesson in remaining positive despite building negativity. It’s been clear from meeting people abroad that the U.S. is not the beacon of prosperity and hope it used to be, or at least we believed it to be. Seemingly weekly shootings, systematic racism, too much attention to those whose opinions shouldn’t matter, it can get pretty depressing. But it’s not like the rest of the world is a beacon of hope. Thank you ISIS, al-Qaeda, Boko Haram, human trafficking, the terrifying ocean trade, you all are making the world a scarier place.

Which, oddly, brings me back to the picture above.

This picture gives me hope.

Forty years ago, in order to photograph around Hoi An, where I took this picture, I would have had to be embedded in the military, facing horrors I cannot, and do not want to, imagine. In 2015, all it took was a passport and some local transportation. That’s incredible. It took time and effort, but the fact remains that we are at the point where two former enemies can meet in a field and share a laugh, for no other reason than because it’s fun! It’s incredibly easy to get bogged down by the negativity of today’s news. It’s easy to shut out the white noise and BS that comes along with politics, but through it all, hope really is important.

We left Vietnam on the eve of the 40th Anniversary of the Fall of Saigon. Or as the Vietnamese call it, Reunification Day. On our last night in Saigon, we were walking back from dinner and ended up walking past rehearsals for the upcoming celebrations. It was strange, to say the least, to be a visitor in a country celebrating the defeat of your homeland. Yet, amongst the patriotic anthems and celebratory parade rehearsals, Jenna was approached by two Vietnamese girls who wanted a picture with her. A mini selfie fest ensued, giving Jenna her moment of hope:

Tonight, Vietnam is getting ready to celebrate the 40th anniversary of Reunification Day (or “The Fall of Saigon” as it’s known back in the States). Ben and I stopped to watch the very impressive, very patriotic practice run for the parade and these two girls asked to take a picture with me. We ended up taking about 15 pictures, giggling like a trio of schoolgirls. Afterward, they thanked me in English and I thanked them in Vietnamese. The irony of the situation wasn’t lost on me, as thousands of people in the background celebrated the defeat of American interests in Vietnam. But in the moment, it was just a lot of fun to goof around with these two.

Say what you will about selfies being the demise of humanity, that one counts for something.

Initially, I was tempted to go into some sort of call to action about staying involved, ignore the BS of politics, and make sure you stand up for what’s “right”, but honestly, that’s not what I wanted this post to be about. I mean, you should do that, but I’m not nearly involved enough, or politically savvy enough to be the one on the soapbox declaring it.

All I really wanted to say is that over time and with the right effort and courage, circumstances change. A generation ago, these photographs would have been impossible. Forty years later, all it took was some choppy Vietnamese and English to get the okay. Twenty five years ago, Eastern Europe was nearly impossible to visit as an American. This year, we spent almost two months exploring relatively new countries, former members of the USSR and Yugoslavia.

Twenty-three years ago, my Grandma visited Syria. Now, there is probably no place more dangerous to go. Unfortunately, these reversals can go both ways. But, maybe, with time and effort, in forty years I’ll be taking a picture of a fellow sexagenarian in Aleppo. At least, that is my hope.

One Minute through Copenhagen
Logar Valley: the most beautiful place in Europe